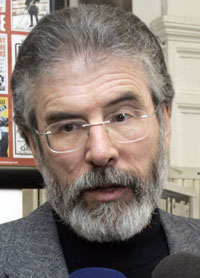 SINN FÉIN West Belfast MP Gerry Adams has accused so-called dissident republican groups of engaging in “unacceptable criminal actions through extortion and intimidation.”
Adams said:
“There has been an increase in criminal actions by a number of organised criminal gangs who claim to be republican organisations.
“The gangs involved are targeting innocent families, business people and in some instances other criminals, in particular drug dealers, demanding protection money.
“Some have also carried out attacks on others who have been involved in domestic or family disputes.
“On Wednesday the CIRA destroyed a JCB belonging to a contractor carrying out work on the Casement Park site.
“This attack took place after several threatening phone calls to the contractor and intimidatory behaviour by a number of individuals who demanded money.
“It is the latest in a long litany of similar actions by people claiming to represent this group. But it is not exclusive to it.
“Others are using the names Óglaigh na hÉireann, the Real IRA, or the INLA.
“Their actions are not about furthering the republican goals.
“On the contrary they tarnish the name of Irish republicanism and seek only to further the self interest of those involved.
“This behaviour is intolerable and it must end.
“It includes protecting drug pushers by extorting money made through this reprehensible practice; it involves threatening business people and families in this community.
“I would appeal to anyone who is genuinely committed to republican aims and objectives and who values the legacy of all of those who gave their lives during many years of struggle, to reject these groups.
“Anyone who is concerned about the welfare, the quality of life and the future of our people should ask these groups to stop.
“I uphold the right of others to dissent from the mainstream republican position and to oppose Sinn Féin strategy, if that is their view, but I believe there can be no political tolerance for the actions I have highlighted today.
“I would challenge those who set themselves up as supporters of these groups to repudiate these actions and co-operate with the PSNI in ending criminality in our community.”