ECONOMIC CRISIS : Biggest union calls for banks to be brought under public control 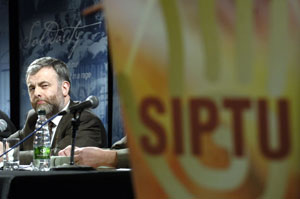 SIPTU said this week that the scale of the current global economic crisis has not been seen since the Wall Street Crash of 1929 and this has been caused by the neo-liberal, free-market policies pursued by the Irish Government which have left a gaping hole in public finances.
SIPTU called for a ‘Social Solidarity Pact’ to apply to all sectors of society who would “contribute in accordance with their capacity to do so”. It also called for the banks to be brought under public control to ensure they act in the public interest and prohibit the reckless behaviour that we have seen.
SIPTU additionally made a series of proposals to safeguard pensions for workers and improve public services, save jobs and protect pay.

ISME CALLS FOR CUTS
This statement came at the same time as Irish Small & Medium Enterprise Association (ISME) called on the Government to introduce emergency legislation to bring in public-sector pay cuts.
ISME Chief Executive Mark Fielding said that cuts in public sector pay are “vital” and the Government should be “allowed make the cuts without being challenged in the courts”. The Irish Nurses’ Organisation has said that any pay cuts in the public sector could be illegal, according to its legal advice.
Education Minister Batt O’Keefe said earlier that pay cuts for public sector workers will be considered in an effort to cut €2bn from public spending. The minister said that he hoped the social partners would play a role in that process but that the Government would have to govern and it would make the decisions.
The INO is seeking clarification that pay cuts will not be on the agenda for meetings between the Government and the Irish Congress of Trade Unions which are scheduled for later in the week.