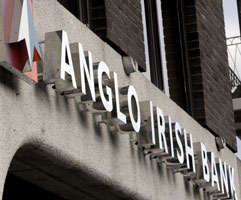 AS SHARES in Irish banks continue to fall, crisis reigns in the banking sector as the Government begins what will be the first of many nationalisations. Sinn Féin, a supporter of state banking for decades, opposed the Anglo Irish Bank bail-out. Arthur Morgan, told An Phoblacht it was a case of “right move, wrong bank”.
Confusion reigned within the Department of Finance, beginning with a late-night announcement on Thursday, 15 January, of the Anglo Irish nationalisation deal.
More confusion and claims of “catastrophic consequences” from Brian Lenihan came this week as the Government sought to amend their own draft bill. Within hours of publication, the Fianna Fáil/Green Coalition backed off on commitments in the bill that deposit holders with major loans owing would not be allowed reduce their accounts below €20m.
The final bill was only published minutes before the actual debate began. However, the Dáil debate itself was drowned in the roar of falling stock markets not just in Ireland but across the EU and the US that, over the week, have plummeted many banks’ share prices towards the point of no return.

ULSTER BANK
In Britain, new funding and an increased shareholding by the British Government has not been able to save the Royal Bank of Scotland, which in Ireland trades as Ulster Bank. Its shares hit a 20-year low on Monday after it revealed the firm was facing losses of £28bn, rebounding slightly on Tuesday.
AIB hit a 22-year low on Tuesday with shares worth just 30 cent, giving the bank a market capitalisation of only €278m. On Monday, AIB and Bank of Ireland lost 59 per cent and 55 per cent of their value respectively as share prices went into freefall. Irish Life and Permanent shares fell by 41 per cent.
It was against this background that An Phoblacht spoke to Sinn Féin TD and Finance spokesperson Arthur Morgan. Morgan had been originally promised 10 minutes’ speaking time but as Coalition whips sought to railroad the bill through all its stages in a few hours, 10 minutes became five and then was down to three by the time he took the floor.
An animated Morgan told An Phoblacht there are still too many unanswered questions surrounding the Anglo Irish bail-out.
“Why,” he asked, “is it that banking institutions were exempt from the 1990 Companies Act and how is it that our ‘world class bankers’ can get away with almost destroying our ‘world class economy’ without ever being noticed by their ‘world class auditors’, Ernst & Young, or the Financial Regulator?”
Morgan believes passionately in the idea of a state-run bank.
Outlining how such a bank would work he said:
“We need a bank that can be a supply of venture capital for Irish-owned firms or run funding for environmental-related businesses, alternative energy, retro fitting, building insulation technologies.
“We need a bank that can offer funds to business start-ups, to families looking for low-cost housing loans. We don’t need a bank that only funds hotels in Mayfair, condos in Ballsbridge or golf courses in Portugal but cannot take a risk on the Irish economy.”
To sum up, it was, Morgan said, a case of “right move, wrong bank”.

ARTHUR MORGAN reaffirmed to the Dáil Sinn Féin’s commitment to a state-owned bank but why it was opposing the Anglo Irish Bank nationalisation.
“We support public ownership of a major banking institution but this is not nationalisation in the public interest, it is simply a bail-out for the former patrons of the now defunct Fianna Fáil Galway race tent.
“The bank guarantee scheme was described by Minister Lenihan at the time as ‘the cheapest bail-out in the world’. Well with this bill the taxpayer is now set to take on a €73bn loan book – on top of the €10bn botched recapitalisation plan and the €440bn guarantee scheme  – without being given any information as to what it is all about.
“This crisis was ‘made in Ireland’. It was created by the corrupt culture endemic in our financial system and encouraged by successive Fianna Fáil governments out of their love affair with greedy property developers.
“The revelations about the hidden loans made by Seán Fitzpatrick and others have exposed the systemic fraud in Irish banking. It has shown that senior bank managers and their auditors cannot be trusted, that our officials in the financial regulator are incompetent, and that the Government’s banking policy is an abysmal failure.
“Anglo Irish is Ireland’s Enron but, unlike the United States, there will be no criminal investigation and nobody will be brought to justice.
“It beggars belief that Seán Fitzpatrick can get away scot free having embezzled over €80m while a man in my own constituency of Louth is imprisoned for simply not having a dog licence!
“If Fitzpatrick did not break the law in fraudulently obtaining tens of millions of euros, then why aren’t there laws to make such behaviour illegal?
“In handling this crisis, the Government are simply making it up as they go along. They told us four weeks ago that any nationalisation would be affirming that we have no confidence in the bank as a bank to survive. Now they tell us that it will be ‘business as usual’ when we nationalise Anglo.
“They haven’t told us what the actual volume of bad debts is, nor will they tell us why the bail-out is even necessary. Each time we ask questions, we are accused of putting the national interest at risk. Well, Sinn Féin believes that the public does have a right to know if the Government is going to bankrupt the state.
“We support the establishment of a major state bank that will give credit to SMEs, that protects family homes, and that will restore confidence in the Irish economy. This means nationalising a useful bank such as Bank of Ireland or AIB, not a hopeless, poisoned institution that we have no information about. We will therefore be opposing this bill.”
Caoimhghín Ó Caoláin TD referred to the multi-million euro loans for his personal use raised from Anglo-Irish Bank by Seán Fitzpatrick which he deliberately concealed by transferring to Irish Nationwide Building Society. Ó Caoláin said:
“It is time to call a spade a spade. The actions we know of – and more may come to light following full investigation – were, without question, criminal. I do not make that charge lightly. We see the credibility of not only a single financial institution but of the combined banks and other financial entities faced with the most serious situation in our lifetimes, with all the consequences that represents for ordinary citizens.
“I have listened carefully to the Minister’s contributions but has he told all the information he has on the historical and contemporary affairs of this banking institution? He should consider his response carefully.
“As regards the affairs of Mr. Fitzpatrick, is it not clear and obvious that there were at least two financial institutions involved in a shadowy exercise of disguising that person’s business affairs and whomever else he may have been acting on behalf of? Is Irish Nationwide not equally complicit in that whole exercise of deceit? Where would the Minister draw the line in investigating the financial institutions that have operated, and continue to operate, in this State? He cannot do so.”