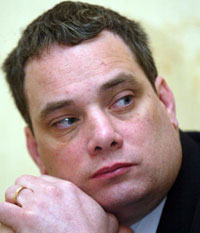 AENGUS Ó SNODAIGH, Dublin South Central TD and Sinn Féin spokesperson on International Affairs, last week confronted Israeli Ambassador and Fine Gael TD Alan Shatter over their defence of Israel’s onslaught in Gaza at a meeting of the Oireachtas Joint Committee on Foreign Affairs. Since then, Shatter and the Israeli ambassador have distorted and misrepresented what Ó Snodaigh said. Shatter continued this week with an Opinion piece in The Irish Independent. Aengus has asked the Independent for a ‘right of reply’ to Shatter’s article. We carry it here.

Deputy Alan Shatter has clearly courted the media with a distorted representation of the proceedings of the Foreign Affairs Committee last week.
He has actively ensured that media attention was diverted away from the lengthy exchanges and substantive discussion that took place between TDs and ambassadors in the committee, a discussion that focused in the main on the unjustifiable actions of Israel, the mounting deaths of innocent children, and the use by Israel of white phosphorous in residential areas.
At the committee – as part of a substantial contribution based on the atrocities that I witnessed myself in a recent trip to Gaza and those that have featured on our television screens since – I compared the propaganda efforts of both Deputy Shatter and the Israeli ambassador to those employed by the Nazi regime in denying the Holocaust. Anyone who takes the time to read the full transcript of the debate would be in no doubt that my comments were in no way prompted by Deputy Shatter’s religious status but rather by his appalling efforts to justify the unjustifiable murder of hundreds of Palestinian children and civilians by Israel.
By crying anti-Semitism, Deputy Shatter is essentially crying wolf and sadly this only serves to damage those who are genuinely working to eradicate racism from modern Irish society and to distract from the real issue (i.e. the current and ongoing terrible wrongs of Israel).
To derive from my support for the Palestinian people that I am anti-Semitic is twisted logic.
To deny that white-phosphorous was used by Israel against the Palestinians is blatantly false.
To attempt to justify the collective punishment of the Palestinian people, the killing of hundreds of innocent children and civilians, the complete destruction of Palestinian infrastructure, the blocking of food, medical supplies and fuel into Gaza and the targeting of schools and crèches, as Deputy Shatter and the Israeli ambassador did during that meeting, is to attempt to justify the unjustifiable as the infamous Nazi war propagandist Josef Goebbels did during the Holocaust. This is the context within which I made my comments.
Deputy Shatter was the only one to bring religion into the conversation. I was speaking about human rights which are universal to everyone, regardless of religion.
I apologise only to the Palestinian people for unintentionally distracting media attention and for the failures of my government and of others in my parliament to take stronger action.

LIFT THE SIEGE
I welcome the ceasefires from both Israel and Hamas and would call on Israel to take its military apparatus and personnel out of the Gaza Strip immediately and to fully open the border crossing to allow relief aid and reconstruction materials unimpeded access into Gaza
The two-year-long siege of Gaza must be lifted to allow schools, hospitals, houses, sewage and power stations to be urgently rebuilt. I would appeal to those resistance groups within Gaza not to indiscriminately target civilians.
The ceasefire called by Israel is good news for the Palestinian people of the Gaza Strip who have been bombarded for three weeks and have seen at least 1,140 of their people slaughtered with thousands more injured.
This time period should be urgently used to build a lasting peace. This should be based on direct dialogue, political negotiation and respect for human rights.
World peace and stability is in the interests and responsibilities of all sovereign nations and that includes peace in the Middle East. What is required is, of course, a free, viable Palestinian state and security for Israel. And the days of Israel using the excuse of security to slaughter innocent Palestinians must be brought to an end. Never again must Israel be allowed to slaughter innocent people in this manner.