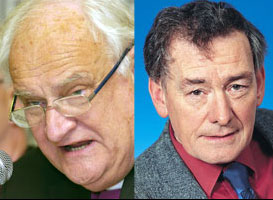 THE Eames/Bradley Commission into dealing with the past is due to publish its report in the coming weeks. Sinn Féin has met the Eames/Bradley body on a number of occasions despite its reservations about the fact that it is established by and answerable to one of the protagonists to the conflict: the British Government.
Sinn Féin has concluded that the establishment of an Independent International Truth Commission is the best way of taking this issue forward. But this cannot work if such a body is established by and answerable to the British Government. The British state are protagonists in this conflict – they are not innocent observers.
Sinn Féin President Gerry Adams MP said this week:
“There are many victims organisations who fear that the Eames/Bradley proposals will not recognise this reality and allow the British state to continue its policy to date of cover-up and concealment. That would be unacceptable to Sinn Féin.
“We were also the first political party to publish proposals on the issue of truth recovery,” Gerry Adams said, adding: “We have put forward a number of proposals which we believe must underpin any effective truth recovery process.”

The principles Sinn Féin identified are:–
•     All processes should be victim-centred and deal with victims on an all-Ireland basis;
•     Full co-operation by all relevant parties is essential to the success of any commission;
•     There should be no hierarchy of victims;
•     All processes should be politically neutral;
•     Any future panel should be international and independent;
•     One of the purposes of any future panel/commission should be to examine the ‘causes, nature and extent’ of the conflict;
•     An objective of any process should be healing – both for direct victims and for society in general;
•     A common aim should be to enable society to build the peace;
•     Reconciliation should be the core aim of any truth process, and respect and generosity should inform the parties seeking to reach agreement.
“Sinn Féin will judge any proposals from the Eames/Bradley Group against this benchmark,” Gerry Adams said.
“It must be a process that can deliver the truth to bereaved families as a result of independent investigation. And it must analyse the policies and practices that sustained and fuelled the conflict.
“One way of achieving an independent process is to have an international inquiry. The United Nations or another reputable agency could be involved.”
An Phoblacht
44 Parnell Sq.
Dublin 1
Ireland