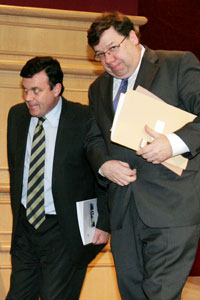 A RECORD net loss of 120,987 jobs in the 26 Counties last year and a Six-County unemployment figure now rising at its fastest rate in 30 years shows that, across Ireland, jobs and unemployment are the key economic issues in 2009.
Other figures and comments from the IDA Ireland, Enterprise Ireland and the Irish Exporters’ Association all highlight the imperative of quick action but, four months on from the first official figures showing that the 26 Counties is in a recession, and seven months since the first announcement of falling tax revenue and spending cutbacks, there is no solid action from government.
Last week’s December 2008 Live Register figures showed 291,363 people signing on, a 71 per cent increase on the end of December 2007 and an unemployment rate of 8.3 per cent. The 291,363 figure is the highest recorded since December 1993, and for now things are only set to get worse as a Reuters poll of economists forecasts a 2009 26-County unemployment figure of 395,000.
In the Six Counties, mid-December figures put unemployment at 34,100, and those figures had jumped 3,100 in the month of November alone, and over 50 per cent in the year to date, an increase of 11,251 people signing on.
Ulster Bank economists are predicting that Northern unemployment could hit 50,000 in 2009.
The November increase in the Six Counties saw a third of the new claimants coming from the construction sector and this trend is set to continue in 2009. Manufacturing and services sectors are also reporting increasing job losses.

‘GET REAL’
Just days after 1,900 Dell jobs fell victim to the forces of low-wage globalisation, and the fate of hundreds more workers in Waterford Wedgewood and Tara Mines hang in the balance, Fianna Fáil Taoiseach Brian Cowen, speaking from a trade mission in Japan this week, asks us to “get real”!
How real does Brian Cowen think we need it?
For example, unemployment doubled in 2008 in Cavan Town from 2,161 to 4,159 people. In Ballybofey, it rose from 870 to 1,836. Monaghan Town registered a 100 per cent plus increase from 769 to 1,557, as did Portlaoise, Castlepollard in Westmeath, Westport in Mayo, Kells in Meath, and Killorglin in Kerry. This is the reality that that Fianna Fáil in government have shown no leadership on in 2008 and the outlook for 2009 is so far not much better.
Cowen’s lieutenant, Finance Minister Brian Lenihan, writing in The Irish Times this week, talked of the need for more “corrective action” and “difficult decisions”.
Lenihan’s article talks of the need for “action now”, “urgent discussions” and “time is of the essence”, yet the end-of-year economic data shows clearly that the Government spent 2008 letting the economy spiral out of control.
The Fianna Fáil/Green Party Coalition knew by the end of April 2008 that the tax revenue was collapsing, a clear signal of wider economic problems. Calling an October budget nearly two months early signalled knowledge of the growing crisis, as did the October banks bail-out but in the terms of real actions on jobs there has been nothing.

DITHERING
Every sector has been reporting clear evidence of a crisis and recent reports from the IDA, Enterprise Ireland, the Irish Exporters’ Association and tourism through Fáilte Ireland only serve to highlight the crucial time being lost by Coalition Government dithering.
IDA Ireland’s end-of-year report showed a 1,207 decline in jobs supported by the agency. In 2008, there were 136,000 full-time workers in IDA-supported firms, 10,044 jobs were lost in IDA-backed firms, while 8,837 new jobs were created and a total of 130 new Foreign Direct Investment projects came to the 26 Counties.
Enterprise Ireland figures showed a decline of 8,003 jobs in firms it supports. Construction and construction-related sectors accounted for 65 per cent of the Enterprise Ireland jobs lost in 2008, leaving the agency supporting 145,567 jobs in 2008.
The most recent Quarterly National Household Survey showed a total workforce in the 26 Counties of 2,120,800, which in the third quarter of 2008 was down 25,000 on the same period in 2007.
So with a work force of 2.1 million workers the IDA and Enterprise Ireland are only involved in supporting 281,567 workers.
Recent data from Fáilte Ireland showed that up to 25,000 jobs were lost in the tourism sector in 2008, a 10 per cent fall. Visitor numbers fell by 3 per cent, cutting estimated tourism revenue by 2 per cent to €6.3 billion for the year. The tourism sector declined significantly in the second half of 2008 and with “four out of every five hotels” experiencing an overall drop in profitability.
Last week, the Irish Exporters’ Association reported statistics for 2008 and projections for 2009 that make dismal reading. Total exports fell in 2008 by €6 billion, down 4 per cent for the year with the first fall in services exports in the last 20 years recorded. Total exports in 2008 were €148.2 billion
John Whelan, chief executive of the Irish Exporters’ Association, anticipates that “exports form Ireland in 2009 will fall by a much as €7.5 billion” and that this could mean “job losses of the order of 35,000”.
Whelan also said:
“Such a decline can only be diminished if corrective action is taken immediately as a matter of urgency.” So where is the urgency?

GOVERNMENT LEAKS
What we have had are grand announcements and systematic leaks from Government on the need for wage cuts and now job losses in the public service. It seems that for Fianna Fáil and the Greens in government there is no actual plan to create jobs.
Sinn Féin TD Arthur Morgan, responding to last week’s record unemployment figures, summed up the problem when he said:
“The Fianna Fáil/Green Party Coalition has yet to produce a single concrete proposal to kick-start the economy and create employment.
“The Government’s economic stimulus package is worthless.
“Sinn Féin has repeatedly called for a job-creation plan that would involve major public infrastructural investment. The solutions and skills are out there to revive the economy and provide new employment. The problem is Government hesitation, indecisiveness and incompetence.”