North-west EU candidate steps up to the mark 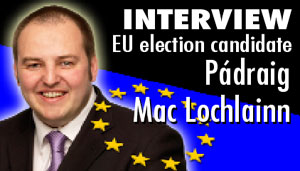 PÁDRAIG MAC LOCHLAINN (35) is a Sinn Féin councillor for County Donegal and is also a Buncrana Town councillor. His father, the late Réamonn Mac Lochlainn, was an IRA Volunteer who served over nine years in English jails. Although he was always very close to his father and is very proud of him, Pádraig is very much his own man and is, as he puts it, “to be judged on my own merits”. Judging from his performance to date, his merits are considerable indeed. He tells ELLA O’DWYER about the neglect suffered by communities in the Ireland North-West EU constituency and talks about the European Parliament as ‘another site of struggle.’