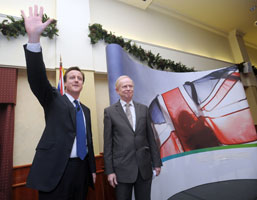 I HAD a ‘Where are the emperor’s new clothes?’ feeling as I watched and listened to the news coverage of the Ulster Unionist Party conference held in a south Belfast hotel last Saturday, 6 December.
The main attraction was, strangely, not the leader of the Ulster Unionist Party, Reg Empey, but the leader of the British Conservative Party, David Cameron.
Cameron’s message that the once mighty Conservative and Unionist Party would arise (I hope all you republicans reading this can bear the pun), phoenix-like out of the ashes of the Anglo-Irish Agreement  – or the Hillsborough Accord to you and me – to once again dominate the politics of these islands and this is the objective that the two leaders are striving towards.
The Tory leader was here to tell UUP delegates that the mistakes made by the Thatcher Government in signing the treaty at Hillsborough which provoked the UUP into breaking away from the Tories in a fit of pique were to be rectified and he vowed: “I will never be neutral when it comes to expressing my support for the Union.”
But the Ulster Unionist Party’s sole Westminster MP, Lady Sylvia Hermon, has a record of voting with Labour rather than the Tories in the London parliament, so the one thread that links the Tories and the UUP looks extremely fragile.
For the UUP to believe that hiding under the mantle of an increasingly unelectable Tory Party will be its saving grace is one misconception too far.
So while most commentators are focusing on the ‘buzz’ that Cameron’s appearance engendered on Saturday, I’d prefer to ask, ‘Just what colour is the emperor’s new coat?’