Cowen's fudge and fumble over Lisbon 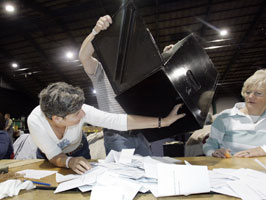 A HEADLINE in The Irish Times in advance of the European Council meeting in Brussels being held on Thursday and Friday of this week announced COWEN TO VOICE IRISH CONCERNS ON TREATY AT TALKS. The Taoiseach is reported to have said that he “will be aiming to achieve a political agreement that the concerns of the Irish public with regard to the treaty will be responded to in a satisfactory way, both in substance and in a legally robust way”.
The same paper reports Foreign Affairs Minister Micheál Martin confirming that “Ireland is seeking legally binding guarantees on a range of issues of concern to the Irish electorate”.
Wrapping up all the pre-summit Establishment propaganda is the expectation that the Irish Government is likely to be set a target date by EU leaders for the ratification of the Lisbon Treaty by the end of 2009 to enable it to come into force in January 2010.
Then there was Europe Minister Dick Roche palmed off by his Government colleagues on to the tabloidesque Irish Independent, telling readers: “It is too early to talk about a date for a new referendum. The primary aim for the Government must be to see if the fears and concerns of the Irish people as reflected in the 12 June result can be addressed.” (As a by-the-by it’s not the first time Minister Roche has been trotted out by his masters to manipulate a media message.)
It is clear that the Taoiseach will announce his intention to ignore the Irish electorate’s decision on Lisbon and that his government will hold a second referendum on the treaty. It is also clear that he will be supported in this by the Green Party, the Labour Party and Fine Gael.
The Government’s handling of the treaty since its rejection in June has swung from arrogant to clueless, in equal measure.
At no point over the last six months did the Taoiseach or any of his Government Ministers deal with the issues raised time and time again by the people regarding workers’ rights, public services, neutrality, democracy or tax sovereignty. Brian Cowen has refused to take the people’s mandate to Europe, choosing instead to sit on his hands, waiting for his European peers to either bully or convince him into action. We are all still waiting.

Brian Cowen will probably coat his announcement of the Lisbon re-run at the Council meeting with expressions of gratitude to his EU partners who have engaged in a lengthy and protracted discussion on how to deal with the Irish rejection of Lisbon. He will then likely laud the ‘legally binding assurances’and perhaps opt-outs that he will have secured. Hogwash!
There are bottom-line issues that should have been secured by government. Declarations are not legally binding and opt-outs on a single issue do not address the real concerns of workers for their rights or families and the elderly on the drive towards privatisation of public services.
The trade union movement across Europe has called for a social clause. Workers have a right to decent work, to equality. They have a right to organise and campaign to improve their lot at work. They have a rightful expectation that the law should recognise and vindicate these rights. Yet government has blanketly ignored this element of the ‘No’ campaign. They have yet to acknowledge the damaging aspect of the treaty’s self-amending clauses or the need to return or strengthen key vetoes not just on taxation but also public services and international trade deals.
These are well-rehearsed arguments across the country by ordinary people.

Following the people’s rejection of the Lisbon Treaty, the political establishment here in Ireland and throughout the EU responded with angry surprise. A period of verbal bullying ensued with threats of isolation and a two-speed Europe. After poll results showed the bootboys that their tactics were in fact solidifying the ‘No’ vote, a mantra of ‘the Irish vote must be respected but there can be no renegotiation’ quickly began.
The Government never had any intention of respecting the Lisbon referendum outcome. It was obvious from 13 June that Fianna Fáil and the Greens would refuse to use the mandate given to them by the electorate by using it as a negotiating tool to address the myriad of voter concerns. They published in September a Millward Brown IMS research report into why people voted ‘No’.
In October, the Oireachtas sub-committee on Ireland’s Future in Europe was set up to analyse the challenges facing Ireland in the EU following the Lisbon referendum result amongst other ‘leading’ terms of reference. This sub-committee could have been an opportunity for real engagement with the public on the direction of Europe. The committee should have brought its work out to the public to debate what their ambitions are for Europe. But, instead, the Oireachtas committee was used (as it was always intended to be) as a space to reshape the public debate to one of Ireland’s membership of the EU.

Fine Gael, Labour and the Greens all actively took part in the charade with Sinn Féin Senator Pearse Doherty, Dublin TD Aengus Ó Snodaigh and Dublin MEP Mary Lou McDonald being the only committee members who actually argued the people’s case in the Oireachtas.
Sinn Féin argued that the committee should travel across the country, meet in different venues including libraries, schools, universities, community centres and places of work. Minister Micheál Martin first rejected this proposal and then the other political parties represented rejected it in turn.
It is also worth noting that the Oireachtas Committee on the Constitution is examining the possibility of reversing the Coughlan judgment of 2000 which secured that the ‘Yes’ and ‘No’ arguments during a referendum campaign get equal access on RTÉ. A review of the ‘referendum process’ by the committee is underway.
The Government has fudged and fumbled on how to address the Lisbon Treaty. Despite the Government and its ‘Yes’ campaign cohorts’ efforts to avoid and ignore the key issues upon which the Irish people voted ‘No’ to Lisbon, we can be sure of one thing: those issues will remain and will be central to the European election campaign next year. If it’s a re-run Brian Cowen wants, well, as they say... ‘It’s game on.’