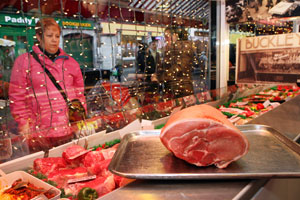 WHERE’S THE PORK? Shelves were cleared of pork and bacon

IT’S thought that the Government in the 26 Counties is to ask the EU for funds to save 6,000 jobs at risk in the pork industry after this week’s contaminated pigmeat scare. Meanwhile, Sinn Féin Agriculture spokesperson Martin Ferris TD asked if the Fianna Fáil/Green government had panicked and over-reacted in recalling all pork products.
EU and Government officials are currently in talks with processors and farm representatives with the hope of saving these jobs while €200m is needed to get the pork industry back on its feet but Government sources are not thought to be hopeful of the European Commission responding positively to its request. It is estimated that the total crisis in the pork industry will cost €1bn. Over 2,000 workers in the pork industry have already been laid off, while the Government is said to be seeking financial aid for processors and compensation for the nine farms directly affected where pigs will have to be slaughtered.
Although 11 premises in the Six Counties have processed pork that originated in the South, it is believed that no pigs in the North have consumed the feed and jobs in the pork industry in the North are currently not at risk
Of the workers already laid off, at least 1,400 of these are members of SIPTU: 850 people have been laid off by Rosderra Meats at their Edenderry, Clara, Roscrea and Jamestown branches; 140 workers in McCarrens in Cavan; 50 in Feldhues in Clones; Killkenny companies Callan Bacon have laid off 79 of its workers; and Dawn Meats 300 people. Thirty workers in Queally Pigs were given a day’s holiday on Monday but no date for a return to work with the remaining 240 workers laid off on Tuesday morning.

RESCUE PLAN
SIPTU National Industrial Secretary Gerry McCormack said:
“These are confirmed lay-offs. There are question marks over how long other plants can continue to operate without a rescue plan being put in place for the industry.
“Protective notices are expected to be issued to a lot more workers over the coming days. Many families dependent on the industry face a grim Christmas this year if the Government cannot rapidly devise a strategy that keeps the industry viable.”
McCormack has asked Agriculture and Food Minister Brendan Smith for an urgent meeting over the jobs crisis confronting the pig industry.
“We only have a very short window of opportunity to deal with the problem before the damage becomes irreparable and these temporary lay-offs become permanent.”

EXPERT
In the Dáil on Tuesday, Kerry North TD Martin Ferris said:
“Professor James Heffron of University College Cork, one of the leading experts in this field, has said that if the data collated by the Food Safety Authority proves that the levels of dioxins were within the acceptable limit then there was no reason why the order to withdraw pork products from sale was made.
“As he has said, these dioxins are in the atmosphere anyway and if the amounts likely to have been consumed in the small number of products that were sold were similar then no harm will have been done.
“Indeed, from the very moment the measures were announced people were being advised that there was no need for anyone to be overly concerned and no need for anyone to seek medical advice. So there was and is no real threat to public health.”

PANIC MEASURE?
The Sinn Féin TD asked if the total withdrawal of pork products was a panic measure not really necessary.
“The question has to be posed therefore as to whether the withdrawal of all pig meat products was necessary or whether in fact something more on the lines of a public health warning might have been more appropriate.”
That way, Ferris explained, people could have been told of the facts as they were known on Sunday morning, the level of risk that was entailed and then advised that it was up to themselves whether or not they chose to consume the products affected.
He acknowledged that this would undoubtedly still have had some impact in the sector, with presumably a significant number of consumers choosing not to eat pig meat but that would have only lasted until current stocks of most produce was naturally replaced anyway once it went past its sell-by-date.
“We would have then avoided the massive shock to the sector that we are currently experiencing and in the process prevented the laying off of so many workers in the run-up to Christmas, the loss to farmers affected and the losses incurred by butchers shops and butchers suppliers.”