Republican Belfast at the heart of Irish history 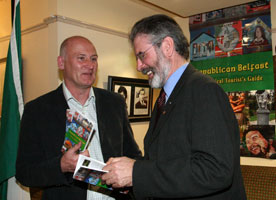 This book is available from the Sinn Féin Bookshop, Parnell Square Dublin, The Art Shop, Falls Road Belfast and An Culturlann Mac Adaim/ O’Fiaich as well as most republican outlets in Belfast.

Rab Kerr is a former republican POW who spent many years imprisonment in the H Blocks of Long Kesh. He is a friend and comrade so when he told me about the book he had written, mapping the political history of Belfast, I was delighted to review it for An Phoblacht.
And when I received the book I saw immediately that this was not just a book aimed at encouraging political tourists to broaden their experience of republican Belfast it is a history book that places republican Belfast at the heart of the history of Ireland and the struggle against British rule.
Most tourists, it seems, follow the tourist trails up the Falls and down the Shankill looking at how, “each side”, compares to the other by the content of their murals. It is almost as if people come to the North with the idea locked in their heads that the conflict here was a religious one and they marvel at how the, “Protestants and Catholics”, have made peace.
Rab’s book, on the other hand, is a history book that documents the sites of political importance right across the city. It gives the tourist/reader a more in depth look at republican history, broadening it out to include a brief account of the founding of republicanism, mostly by Presbyterian revolutionaries, in the 1790s.
This is especially important considering how the proud history of Presbyterian radicalism was shunted into the sidings by a unionist political elite that sees itself as, “more British than the British themselves”.
Yet where the book is most valuable is in the way it brings North, South and East Belfast into the frame, acknowledging that the politics of the past 4 decades effected the whole city.
Republican Belfast is illustrated right through with pictures of the many murals that have adorned the walls of the city over the years – many a shoe was no doubt worn out in the process of accumulating the collection.
Other sites of significance recorded and photographed are the Memorials Gardens that republicans have built to remember the dead of the conflict.
And this again is so important to unpacking the version of the war that the British have peddled across the world; that Catholics and Protestants were at war with each other and the magnanimous British government shouldered the burden of peacekeeper and stepped in.
Republican communities built these memorials to honour and commemorate men and women from their communities. Dead IRA Volunteers are revered not reviled and the magnificent Memorials Garden are testament to that.
The murals reproduced in the book also tell the story of a struggle that goes beyond the borders of this island, demonstrating as they do the international solidarity that is a core tenet of Irish republicanism.
A crucial dimension to this book is that no one should labour under the impression that it is a book for tourists or visitors to Ireland. We should all read it ourselves and remind ourselves that the struggle for freedom is still ongoing, that the many issues depicted in the murals such as the campaign for justice for those killed by plastic bullets is ongoing.
That the British government is stonewalling the family of Pat Finucane and refusing to allow an independent inquiry into the solicitor’s killing.
That we value our dead.
That we continue to stand in solidarity with the oppressed people of the world, especially the Palestinian People who face genocide at the hands of the Zionist murder machine.
This book, with its pictures of murals and memorials, is proof that a people in struggle can write their own stories, rejoice in their victories and refuse to be silenced.
Maybe therefore someone will modify the ‘history’ mural on Oakman Street and tell ‘our rulers’, that “we won’t be put down easy”.
Maith thú Rab.