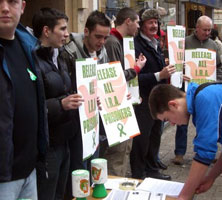 ÓGRA Shinn Féin is mobilising this month in solidarity with the remaining Irish republican POWs, and political prisoners in various parts of the world.
December is traditionally ‘Prisoners’ Month’ and the republican youth movement is organising events to remember the POWs, raising awareness of their plight and calling for their freedom.
While solidarity actions will be taking place throughout December, including a vigil at Ógra’s National Congress, a weekend of action has been called for 12-14 December, where events will take place across Ireland.
On behalf of Ógra Shinn Féin, National Organiser Barry McColgan extended solidarity greetings to the remaining republican POWs and called for their immediate release. He said that it is unacceptable that, over three years on from the announcement by Óglaigh na hÉireann of an end to its armed campaign, republican prisoners are still behind bars.
“We will use Prisoners’ Month to raise awareness on this issue and we will also campaign against the vicious onslaught against the Basque youth movement, Segi, and demand the release of their activists who have been brutalised and imprisoned for daring to organise and express their beliefs openly and democratically.
“The Miami 5, Leonard Peltier and Pól Brennan will also be to the forefront of our minds as we get active throughout Prisoners’ Month.
“We call on all republican activists and supporters to support any events in their local areas. Everyone should do what they can to remember our POWs and their families this December.”