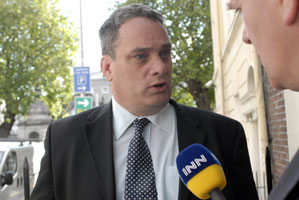 IRISH neutrality and sovereignty are being violated by the active recruitment of young Irishmen into the British Army according to Sinn Féin spokesperson on International Affairs Aengus Ó Snodaigh TD. He said it was disgraceful that this was being facilitated by some media outlets, including RTÉ, The Irish Times and Irish editions of British tabloids.
Ó Snodaigh said:
“Irish neutrality is being violated by the recruitment of young people into the British Army in Ireland. Article 4 of the Hague Convention on neutrality states that ‘combatants cannot be formed nor recruiting agencies opened on the territory of a neutral Power to assist the belligerents’.
“Enlistment in the British Army has been stepped up in Ireland with people from the 26 Counties crossing the Border to join in the Six Counties. The British Army carries on active recruitment in the Six Counties, in violation of the principles underlying the Good Friday Agreement. As unemployment grows the danger is that more young Irish people will be duped into joining this mercenary force.
“It is disgraceful that the British Army’s public relations offensive in Ireland is being facilitated by certain media outlets. The latest example is today’s (Monday) RTÉ Morning Ireland report from Tommie Gorman interviewing Irish members of the British Army’s Irish Guards regiment. Tommie Gorman’s report was a PR coup for the British Army. There was no mention of the role of the British Army as aggressors and occupiers in Iraq, Afghanistan and Ireland.
“We have also seen a serving British soldier being given a diary slot in The Irish Times and the Irish editions of British tabloids regularly carry jingoistic articles lauding the British Army.
“The British Army is actively engaged in wars and their recruitment activity in Ireland violates Irish sovereignty and neutrality.”