Congress calls for nationalisation of banks 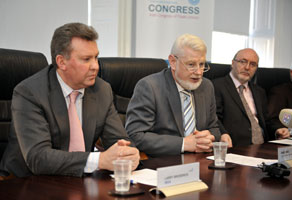 THE Irish Congress of Trade Unions has called on the Fianna Fáil/PD/Green Government to nationalise domestic banks. ICTU also warned that any investment from private equity funds or venture capitalists would cause turmoil in the banking system.
Congress General Secretary David Begg said that the plan to recapitalise the banking system recently put forward by Irish investment managers was “infinitely preferable to proposed involvement by the short-term ‘vulture capitalists’. If they are serious we would be happy to meet with them to explore the proposal in greater detail.”
The ICTU leader went further and said:
“It beggars belief that government could even countenance investment from venture capital and private equity funds – precisely the same sources which have brought about the current international crisis.
“You only have to look at Eircom and our deficient communications infrastructure to realise the damage these people could do to the banking system.”

nationalisation
Congress launched proposals on bank nationalisation this week. David Begg was joined by Jerry Shanahan of Unite and Larry Broderick of the Irish Bank Officials’ Association, whose two unions represent 40,000 people in the financial sector.
Both union representatives warned of catastrophic job losses if private equity funds or venture capitalists were allowed to invest and said this would be resisted with every resource at the unions’ disposal.
Congress’s economic advisor, Paul Sweeney, said:
“We strongly believe that the state needs to be centrally involved in this process. After all, an investment now will almost certainly reap a huge dividend. Why shouldn’t the Irish taxpayer benefit from that and, in the process, protect thousands of jobs?
“In terms of securing the economy and protecting livelihoods, nationalisation of the banks is the only realistic and sustainable option.”