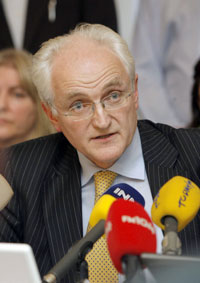 The Environmental Protec-tion Agency (EPA) has issued a licence to Dublin City Council, to operate an incinerator at Poolbeg, Dublin, much to the dismay of residents and environmental campaigners.
Speaking in the Dáil on Tuesday, Sinn Féin Environment Spokesperson Martin Ferris called on the Minister for the Environment John Gormley to explain how the EPA’s decision could possibly contribute to the protection of the environment.
“The Minister for the Environment John Gormley needs to examine the decision of the Environmental Protection Agency to grant a license for the building of an incinerator on the Poolbeg Peninsula.
“He must explain how this decision could possibly contribute to the protection of the environment and ultimately he must seek to have this disastrous decision reversed in the genuine interest on environmental protection”, Ferris said.
Earlier Minister Gormley greeted the decision to grant an incinerator plant licence by saying claiming that his hands were tied on the issue.
The Dublin 4 incinerator will be the first of its kind in the capital and one of the biggest such facilities in Europe, burning up to 600,000 tonnes of waste every year.
Reacting to the EPA decision this week Sinn Féin Dublin City Councillor Daithí Doolan said: “The Environmental Protection Agency is a contradiction in terms. It is an absolute travesty that the agency charged with protecting our environment has granted a licence to a facility that will encourage the increased production of waste across Dublin and beyond.
“Local residents are rightly up in arms over this decision. They are very angry but are also very determined to ensure that this is not the end of the road by a long shot. If it takes a court challenge then they are prepared to go down that route and I’ll certainly be supporting them in that.
“What is most disappointing in all of this is the role of the Minister for the Environment, John Gormley. As a local opposition TD he railed against this proposal from the very start and now as the Minister in charge he has done nothing to prevent it. He now needs to put up or shut up — either bring an end to this crazy plan or step down as Minister for the Environment.”
An Phoblacht
44 Parnell Sq.
Dublin 1
Ireland