Brian Keenan in his own words 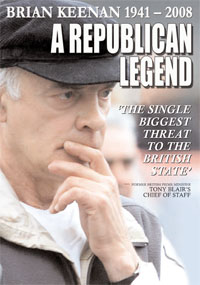 Book Review
Brian Keenan, a Republican Legend
By An Phoblacht.
Price £5/€7
BRIAN KEENAN, one of the IRA’s foremost strategists over three decades of conflict passed away in the early hours of Wednesday morning, 21 May 2008 following a long illness.
Keenan’s pivotal role in the Irish republican struggle was evidenced by the huge turnouts of republicans from every corner of Ireland in South Armagh and Belfast for his funeral.
A few months before his death, Brian spoke to Belfast republican Jim Gibney for the first time publicly about his life as a husband and father of six children, as an IRA activist, his years in jails in England and the influences that shaped his early life.
Brian’s interview with Jim Gibney was serialised in An Phoblacht in March and April of this year. Now those interviews, as well as reports of Brian’s funeral and the orations by his republican comrades have been reproduced in the form of a new booklet. Brian Keenan, a Republican Legend was launched by Sinn Féin President Gerry Adams in Belfast on Wednesday, 3 December.
It tells the story of how Brian joined the IRA in the late 1960s and in the intervening 40 years became one of the IRA’s foremost strategists and a thorn in the side of British in Ireland. Shortly after joining the IRA, Brian went on the run and spent the next 25 years living apart from his wife, Chrissie, his children and his grandchildren. He spent many years as a political prisoner in various jails across England in Special Secure Units (SSUs).
Intensely proud of IRA Volunteers’ heroism and ingenuity and the struggle waged by the ‘People’s Army’ against the British Army – it is clear in this 48-page booklet that Brian never let this blur his vision of the needs of the struggle and the challenges it faces.
England was a theatre of war that became central to IRA strategy to move the political situation to a resolution. It is an area that became associated by British media commentators with Brian Keenan perhaps more than any other contemporary IRA leader. This is a subject which Brian deals with directly in his interviews:
“The IRA leadership knew we could not defeat the British Army militarily but we could bring them to a point where they knew they could not defeat the IRA. We aimed to exhaust their patience through war in the Six Counties and subsequently the campaign in England. You have to be able to bring the struggle to their front door”, he says.
Brian was one of a new breed of leaders who helped re-organise the IRA – derided after unionist sectarian pogroms led by the RUC in 1969 by the wall slogan ‘IRA = I Ran Away’ – into an effective fighting force that won begrudging admiration from its enemies. “The IRA changed urban warfare on a world basis. Other armed revolutionary organisations have borrowed the IRA’s tactics”, Brian says in the booklet.
Although he recognised the challenges political progress still faces in 2008, he argued that the IRA was morally obliged to look at alternative options to continuing the war, especially if there was a viable alternative. As a committed revolutionary, dedicated to social as well as political change, Brian Keenan outlined for Jim Gibney where he saw the situation shortly before his death: “I would prefer we were somewhere else but we are not and that is it as far as I am concerned. Revolutionaries have to be pragmatic – wish lists are for Christmas. At a time of great change we need to constantly lay out the republican vision. We need to constantly remind people we are for ‘equality, liberty, fraternity’. We are against exploitation and inequality.  Historians in 50 years’ time will tell us whether the right path was chosen or not. Of course mistakes have been made along the way, but we have to look to the opportunities that are there to move the struggle forward to reunification and independence.”
In Brian Keenan, Republican Legend, this former senior IRA figure tells, in his own words, what has driven one of the most formidable foes the might of the British state has ever faced.
This is a must read for all republicans.
Brian Keenan, a Republican Legend is available from An Phoblacht, 58 Parnell Square Dublin or online at www.anphoblacht.com/store
An Phoblacht
44 Parnell Sq.
Dublin 1
Ireland