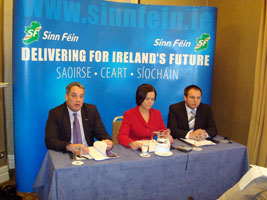 SINN FÉIN Dublin MEP Mary Lou McDonald, Aengus Ó Snodaigh TD and EU North West Candidate and Lisbon Campaign Director Councillor Pádraig Mac Lochlainn have launched the party’s Majority View – Minority Report as a counterbalance to the Oireachtas Committee on Ireland's Future in Europe final report which was published on the same day.
Speaking at a Sinn Féin press conference on Thursday, 27 November Mary Lou McDonald said:
“Since Sinn Féin’s initial meeting with the Foreign Affairs Minister to discuss the setting up of the sub-committee we have constructively engaged with its process at every stage, however we were critical of its composition and narrow terms of reference. We made it clear from the outset that we would not collude in a process whose primary purpose was to lay the ground for a rerun of the Lisbon Treaty referendum.
“Regrettably the sub-committee report published today reflects precisely that happened.
“The sub-committee should have proactively engaged with broad public opinion, met in open session and listened to the views of citizens. The government shamefully chose to reject this approach with the support of all other political parties, bar Sinn Féin.
“The imbalance in the composition of the committee and the ‘witnesses’ was stark. It is therefore not surprising that the report produced by committee is simply a re-articulation of the ‘Yes’ argument which was voiced throughout the referendum campaign.  Although claiming to respect the outcome of that referendum and to understand the legitimate concerns of the Irish people the sub-committee report has chosen to ignore all of those concerns. Sinn Féin has dissented from the Committees report and that is why we are today publishing this Majority View – Minority Report.
“Opinion polls and the government’s own research into the ‘No’ vote has outlined the electorate’s concerns over neutrality, workers’ rights, public services, democracy and Ireland’s loss of influence in the EU. These issues must be addressed in any new Treaty. Obtaining declarations is not an adequate measure and will not secure the necessary protections.
“Fianna Fáil’s cynical approach to the committee will come as little surprise to voters however the public will want to know how Fine Gael, Labour and the Green Party’s support for the sub-committee squares with their repeated calls for respect of the referendum outcome.
“It is time political parties acknowledged that the people have spoken and their mandate to the government is clear.  Fianna Fáil and the Green’s handling of the Lisbon Treaty have been worse than their handling of the current economic crisis. However it is time now that the government stood up for the interests of the Irish people. EU leaders will only move if the Irish government leads the way.”