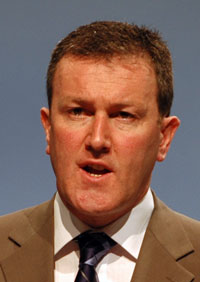 A UNIONIST paramilitary gang attempted to murder Sinn Féin Regional Development Minister Conor Murphy MP over the weekend.
The PSNI said that the Orange Volunteers – who emerged during the 1998 Drumcree Orange Order marching dispute – had claimed to have launched a murder bid on the Newry & Armagh MP.
Speaking on Tuesday, Conor Murphy said:
“I was informed last night by the PSNI that a unionist paramilitary gang calling itself the Orange Volunteers are claiming to have carried out a murder attempt on myself over the weekend in the Newry area.
“This information follows on from a number of pipe-bombs left in the Cookstown area claimed by the same gang: one adjacent to the home of my party colleague, Councillor John McNamee.
“Sinn Féin are obviously taking these events seriously. But we will not allow reactionary unionist elements to deflect us from our work in representing people and driving forward the United Ireland agenda.
“What we do need to hear now are strong words and actions from unionist political leaders in the face of what are clearly attempts to attack the political process from elements within their community.”
Speaking to reporters, Murphy said that as a long-time member of Sinn Féin he is used to such threats but added that it is an issue of concern for his family.
“This is part and parcel of being involved with Sinn Féin,” he said.
“Unfortunately, for too many of our members it has cost them their lives and I think we are always conscious of that.”
The Orange Volunteers emerged during the late 1990s and have claimed responsibility for attacks on Catholic churches and businesses in the North, some of which were justified by the group’s former leader and self-styled Protestant ‘pastor’ Clifford Peebles.
Peebles was jailed for ten years in 2001 after admitting possession of two hand grenades and a pipe-bomb.
The group is also believed to have murdered Ciaran Hefferon in Crumlin, County Antrim in 1998.