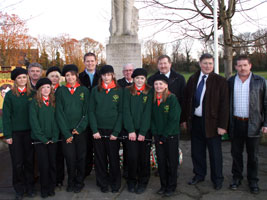 The annual parade and commemoration in honour of Séan O’Carroll and Patrick Tierney, two young IRA volunteers killed by Black and Tans in 1920 was held in Ardee County Louth on Sunday, 30 November.  The parade assembled at the Fair Green and led by the Colour Party and Piobairi Uladh, South Derry Martyrs Band, Burns and Moley Band and Cullyhanna Youth Band and banners from local Sinn Féin Cumainn the large crowd made it’s way to the monument on the Drogheda Road.
At the monument the proceedings were chaired by Sinn Féin Louth County Councillor Pearse McGeough.  Wreaths were laid on behalf of the O’Carroll family by Donna Sloan and on behalf of the Tierney family by Johnny Bradley.  Wreaths were also laid on behalf of the Republican Movement, Louth Sinn Féin Comhairle Ceantair, the O’Carroll Tierney Sinn Féin Cumann and the Geeney/McGeough Sinn Féin Cumann and the Last Post and Reville was played.
The main speaker was Louth County councillor and EU candidate for Ireland East Constituency, Tomás Sharkey, who delivered the main address.
During the course of his remarks Sharkey said:
“Sinn Féin worked so hard on the Lisbon Treaty that 199,000 people in Ireland East voted with us and against the Treaty. We defeated the Treaty in Ireland East. This is the only area that has no MEP to represent the will of the majority. The two Fine Gael and one Fianna Fáil MEPs are hell bent on continuing their campaign to force the Lisbon Agenda on us.
“They have fallen into the trap of being Europe’s representatives in Ireland and not the Irish people’s representatives in Europe. Only 90,000 of those ‘No’ voters would elect an MEP here and that is our goal.