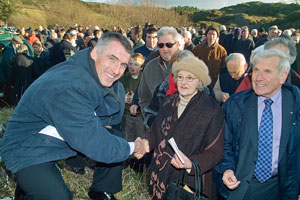 KILMICHAEL LINK: Declan Kearney greets Mary Cronin of Bantry, niece of Denis Cronin, one of the Volunteers in that historic fight at Kilmichael

Political unity and a new standard of patriotism

The Kilmichael Ambush on 28 November 1920 was a turning point in the Tan War. At Kilmichael, the Flying Column of the Irish Republican Army’s West Cork Brigade under the command of Tom Barry killed 17 members of the Auxiliary Division of the RIC.
The Kilmichael ambush came just a week after Bloody Sunday in Dublin and marked a major escalation in the IRA’s guerrilla campaign.
The IRA victory at Kilmichael is commemorated by Irish republicans every year at the site of the ambush in west Cork.
This year’s oration was delivered by Sinn Féin Deputy General Secretary Declan Kearney. Below we reprint that address: