10 tips on the Irish banking sector 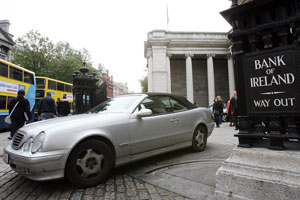 IT IS NOW 65 days since the Irish Government wrote a €440 billion blank cheque for Irish banks. Now the situation has worsened: bank shares are sinking while small business complaints of credit refusals, lack of venture capital or commercial loans goes unheeded. So what should the coalition government do?
Sinn Féin has been a champion of state-owned banks for decades but is this the right circumstance in which to be left holding the stable door when the asset value of the big six banks may not have bolted but (if you don’t mind mixed metaphors) is draining away, when their commercial loan books are faltering with increasing bad debt and thousands of financial sector jobs are on the line, when confusion reigns at the Cabinet table and in bank board rooms about just what are their options?
What are the principles, the important factors that could guide Government decision-making?
1    We cannot go on in the old way: the commercial banking market has failed.
2    At the highest management level, Irish banks have presided over errors that throw serious doubts on their judgment and abilities to manage commercial ventures of such size and importance.
The systems failures in Irish banking go back to AIB’s crisis with the Insurance Corporation of Ireland in 1985, which was bailed out by the Irish Government.
The wholesale tax fraud perpetrated by the retail banks on bogus non-resident accounts has yielded €859m to the Irish taxpayer. Next came National Irish Bank’s interest loading and siphoning off of funds from customers’ bank accounts exposed in 1998, followed by the illegal offshore investments by NIB using the Clerical Medical International group.
AIB’s years of overcharging on foreign exchange transactions is another example, as is the ongoing investigation by the Revenue Commissioners into offshore bank accounts being used for tax avoidance, an investigation that has now yielded over €905m to the Irish Exchequer.
3    Why has the Irish Government not made a clear statement on the banking sector? What is their long-term strategy?
4    The 1989 Banking and Insurance Act that deregulated the Irish banking sector has clearly failed and contributed to the current crisis. We had too much competition for mortgages and commercial property development with resulting questionable lending and now increasing bad debt. We need to go back to a more prudent banking sector.
5    The priority of Government economic policy must be to ensure that every Irish business has credit facilities and access to loans, particularly established businesses coping with the economic downturn.
6    Why are we not considering the 1992 Swedish solution, where the Government became an owner of the banks in a way that made the banks responsible for their failures and allowed government to recoup money invested? A state agency was formed to oversee the recapitalisation of banks and sell off assets, mostly land, to recoup investment. It seems perfectly relevant to the Irish case.
7     Taxpayers’ money invested in Irish banks must be accounted for transparently.
8    Employment in the banking sector must be protected.
9     Private equity funds, by their very nature, do not see long-term and do not share the interest of the host economy they nestle in. Example one: the Eircom debacle.
10     Those who have failed must go. It is time to sack the boards.