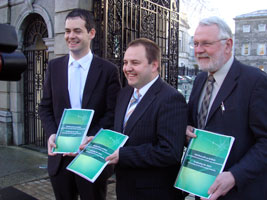 THREE DAYS ahead of a rally by 7,000 West of Ireland farmers protesting against Budget cuts that will hit agriculture (see box), Sinn Féin Senator Pearse Doherty launched a major report for the Dáil and Seanad on the regeneration of the West of Ireland.
The report and proposals contained in Awakening the West: Overcoming Social and Economic Inequality will be presented to the Joint Oireachtas Committee on Community, Rural and Gaeltacht Affairs.
Awakening the West is the first report of its kind in decades and has been put together after a major consultation process involving dozens of groups along the western seaboard.
It identifies the social and economic needs of the West of Ireland – Donegal, Sligo, Leitrim, Roscommon, Galway, Mayo, Clare, Kerry, west Cork and west Limerick – and has concrete proposals for its redevelopment.
Speaking at the launch of the report last Thursday, 27 November, Senator Doherty said:
“Along the western seaboard, from Donegal to west Cork, communities are fighting for their very survival. Government policy has proactively favoured the east coast of the country in infrastructure, job creation and political influence.”
He highlighted the withdrawal and downgrading of vital services such as public transport, post offices and Garda services and public hospitals. The decimation of services together with the destruction and collapse of traditional employment sectors, such the textile and fishing industries, coupled with the exodus of small farmers from the land, has resulted in depopulation and led to unemployment and poverty, he said.
Pearse Doherty said that people in the West feel that “their voices are not being heard in the corridors of power”.
The Sinn Féin senator said the aim of this report is to bring all the disparate groups across the west of Ireland together in one united voice to demand an end to the inequalities in the west and to come up with realistic and reasonable proposals to that end.

The report sets out a lot of detailed proposals to deal with the key issues affecting the West, which include:-

•    A single Government department with overall responsibility for regional development.
•    All state bodies to be compelled by law to assess whether policies would create regional imbalance.
•    Regional and sub-regional job-creation targets set out for Enterprise Ireland, the IDA and other enterprise support agencies.
•    A self-sustaining state agency with a property portfolio to promote entrepreneurial activity at local level in the South-West, North-West and Western counties.
•    An immediate Forfás review of the capacity of the Western seaboard region to attract foreign direct investment and the measures needed to improve its competitiveness and boost employment opportunities.
•    The Western Rail Corridor to be ring-fenced against cutbacks and proceed as planned.
•    State financial support to pilot next-generation broadband schemes in at least three towns in each of the ten Western seaboard counties in which broadband infrastructure enables it.
•    The Department of Communication, Energy and Natural Resources to identify renewable energy zones in the Western seaboard region.
•    The 1,700 public beds in the region’s acute hospitals threatened with closure under the HSE’s PA Report must be retained.
•    A Charter of Rights for the islands and islanders.
•    All plans and statutory provisions for Gaeltacht areas to be integrated into a comprehensive and cohesive planning process which would include language planning, local and physical planning, education planning, structural planning and social planning, including family support services.

The full text of Awakening the West: Overcoming Social and Economic Inequality can be accessed at www.sinnfein.ie

SEVEN THOUSAND farmers, family members and other people dependent on agriculture rallying in County Clare at the weekend heard North Kerry Sinn Féin TD Martin Ferris tell the Government that if they can shore up the banks then they can invest in Irish farming and fisheries.
Addressing families from beyond the Banner County, from Limerick, Kerry and Galway to Tipperary, Wexford, Mayo and Sligo, the Sinn Féin TD looked out on thousands of waving placards bearing the slogan “The West Rejects 25% Government Cut in Disadvantaged Areas” and said Sinn Féin stands with farm families.
“Sinn Féin voted against the Budget and has called for the revoking of all the cuts made in agriculture,” Ferris said to loud cheers from the huge crowd in Ennis.
“The closing of the Early Retirement Scheme and the Installation Grant for young farmers is retrogressive and contradicts the official claims that they wish to encourage farm transfer and the entry of younger farmers.”
Ferris also lashed Fianna Fáil ministers’ cuts to the Suckler Welfare Scheme and the agriculture research body, Teagasc. This will impact badly on the development of new productive systems which again are verbally encouraged by the Government, he said. “However, their actions speak louder than their words.”
“The cuts will not only have a direct and immediate impact on farm incomes but will have a multiplier effect throughout the economy with all the consequences that will have for employment in other sectors.
“We need to emphasise the importance of agriculture. It is the largest indigenous sector of the economy in terms of employment and wealth creation. At this time, when multinationals are leaving and threatening to leave, it is all the more important to protect and encourage our own productive sectors of the economy.
“If the Government can find vast sums to shore up banks which are not slow to foreclose on those who owe them money, then they can afford to maintain and indeed increase the level of investment in farming, fishing and other indigenous enterprise.”