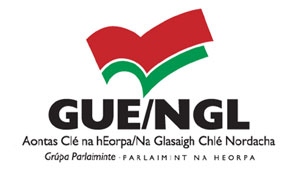 MEP Bairbre de Brún will go to the United Nations Framework Convention on Climate Change (UNFCCC) talks in Poznan, Poland, as part of the European Parliament team. The EP team will be there from 8 December until the talks finish.
The present international climate change regime is regulated through the Kyoto Protocol. However, this runs out in 2012 and the pressure is on to have a new international agreement on what will replace the Kyoto Protocol by the end of next year.
The UNFCCC climate talks in Poznan will show whether or not this is likely to be achieved.

POLITICAL SCENARIO
The European Union has taken the lead in the past in arguing for a strong and effective future climate deal. The EU was in a strong position at the climate talks in Bali last year because of the commitments it had made and which are known by the term “20/20/20”, meaning that 20 per cent of energy should come from renewable sources by 2020.
It could be in a similar position at the Poznan talks this year if it had agreed strong legislation to put flesh on the bones of its commitments. However, as always, words are easier than deeds.
A number of things have since intervened:-
•    There is opposition, most notably from some Eastern European countries, led by Poland, to strong EU legislation;
•    The vote on the EU legislation might not now happen until after the Poznan talks;
•    EU President Sarkozy has given a strong speech in the European Parliament on achieving a good package of climate legislation, in spite of the financial crisis but this is often not reflected in the negotiating positions of his ministers.
In the meantime, China has signalled its willingness to join an international agreement if industrialised countries provide help with technology transfer. And, of course, all eyes are on Barack Obama, even though he will not take over the US Presidency until January 2009.
Obama has made a number of commitments which, if implemented, would greatly improve the prospects of meeting the reduction in emissions the world needs. He has promised to implement a cap-and-trade scheme along the lines of the EU model and has signalled that he believes the USA should not use the tardiness of others like China as an excuse for not meeting its own obligations.

THE ROAD TO COPENHAGEN
The European United Left group in the European Parliament has outlined a clear position on what the future international deal should look like and see the coming talks in Poznan as an important stage on the road to Copenhagen, where the final deal will need to be concluded.
The future post-Kyoto regime should be equitable, based on historical responsibility and on the basis of “common but differentiated responsibility and respective capabilities”, says the GUE/NGL Group in the European Parliament whose MEPs, working together with environmental NGOs and local communities, keep the pressure on the EU to work for an ambitious climate deal that really counts for the world’s poor.
GUE/NGL will oppose any move towards an agreement based on the lowest common denominator. Developing a new green economy is our most promising path out of the present crisis. Green technology can be the basis of a new industrial revolution.
Urgent action is needed where situations are dramatic.
•    Early action will avoid further costs of climate change and promote job creation – delaying action will increase the devastation caused by climate change and the associated costs;
•    A 40 per cent reduction in greenhouse gas emissions by 2020 and a 70 per cent to 90 per cent by 2050 compared to 1990 levels needs to be ensured to meet at least the long-term objective of keeping temperatures below 2°C higher than pre-industrial levels;
•    Energy efficiency and renewable energies are the best basis for environmental and economic benefits – the EU ‘indicative’ target of 20 per cent greater energy efficiency by 2020 must be replaced by a mandatory target;
•    A global agreement on the treatment of the international aviation and maritime sectors need to be included in the Copenhagen agreement.
Speaking ahead of the Poznan talks, Bairbre de Brun  MEP said:
“The developing world must not pay the price for the past mistakes of industrialised countries and financial support from richer countries to help them adapt to climate change must be a priority and part of the Copenhagen agreement.
“We must help the poorest nations and most vulnerable communities to cope with increasing climate-change damages and ensure that tropical deforestation is averted.”

Deal on CAP reform hammered out

EU MINISTERS have agreed on the details for the mini-reform or so-called ‘health check’ of the EU’s Common Agricultural Policy. The next major reform of the Policy will take place in 2013. The deal was struck in Brussels while, almost simultaneously, MEPs made their position known in Strasbourg.
One major element of the deal was the increase in ‘modulation’, the process whereby direct payments to farmers are reduced with the savings being used instead for rural development programmes. This increase in modulation will not affect farmers in the Six Counties as it will be cancelled out by a reduction in the level of voluntary modulation currently applied.
In the South, however, farmers’ leaders reacted angrily with IFA President Padraig Walshe saying that “the significantly increased modulation cuts on the Single Farm Payment agreed by the EU Farm Council was another direct hit on the incomes of individual farmers on top of the Government’s own Budget cuts”.
MEPs Mary Lou McDonald and Bairbre de Brún voted for the removal of farmers earning less than €10,000 from the modulation scheme and instead for the scheme to be applied progressively.


MILK QUOTAS
Milk quotas are to be increased by 1 per cent until their abolition in 2015. MEPs backed this aspect of the deal but asked the Commission to review this decision in 2010.
One criticism of CAP which remains valid is the massive payments to non-farmers, including both large food companies and massive landowners sitting on valuable land while, at the same time, smaller family farmers are pressurised into diversifying or leaving the land.
In the 26 Counties in 2007, the largest payment of €506,203.37 was paid to a large food group.

THE French political system is being shaken with the launch of a new Left party, Parti de Gauche (Radical Left Party), in Paris on Saturday, 29 November. About 3,000 people attended the launch. The founding congress of the new party will take place in February.
The main forces behind the new party are former members of the Parti Socialiste (sister party to the Labour Party and the SDLP), the most-well-known of whom are Senator Jean-Luc Mélenchon and Marc Dolez MP, both of whom have taken very strong public positions in opposition to the Lisbon Treaty and have been very supportive of the Irish ‘No’, including doing joint press conferences with Mary Lou McDonald MEP in Paris and Brussels.
The new party characterises its members as being “resolutely republican, defending without concession the sovereignty of the people”.
Mélenchon and Dolez have been joined by long-standing left republicans, Jacques Desallangre MP and Senator François Autain.
One of the big issues giving rise to the creation of the PG is the European Union. Its members are part of the majority of French people who voted against the EU Constitution in 2005 and who remain opposed to the Constitution in its new form - the Lisbon Treaty.
The most immediate challenge is next year’s European elections. The PG has already agreed with the Communist Party to work to establish “a left front for another Europe – democratic and social”. Such a front, or partnership, would be open to and actively seek to involve “all the parties which were engaged in the fight for a ‘No’ vote to the draft European Constitutional Treaty”.
In his speech at the PG’s launch, Senator Jean-Luc Mélenchon declared:
“The France of rebellions and revolutions once again has a flag and a party!”
Looks like the pro-Lisbon political establishment in France have a challenge in the European Parliament elections in 2009.

MEP Bairbre de Brún has welcomed the support of European Parliament President Hans-Gert Pöttering for a Centre for Conflict Resolution in the North of Ireland.
De Brún said:
“I am on record as calling for the establishment of an EU Centre for Conflict Resolution in the North of Ireland and welcome the warm words of support from the President of the European Parliament Hans-Gert Pöttering.
“I believe that such an EU centre here could make a huge contribution to conflict resolution across Europe and beyond.
“In my evaluation of the PEACE programme, adopted by the European Parliament this year, I looked at the European link to a peace-building project. I specifically referred to the fact that some member states have conflicts of their own and the process of conflict resolution in those areas could benefit from looking at the Irish experience of how the EU helped.
“Under measure 4.1 of the PEACE II programme, there was an exchange of experience at project level between areas across Europe and further afield, including Albania, Belarus, Moldova, Serbia, Ukraine and Bosnia.
“We are now looking at creating a Europe-wide network of regions and cities that are coming out of conflict or that are living with conflict and exclusion. The European Commission has enthusiastically backed the creation of such a network.”

MEMBERS of the Swedish Parliament (Riksdag) said yes to the Lisbon Treaty on 20 November: 243 members voted for the treaty, 39 voted against, 13 did not vote and 54 were not present. Green and Left Party MPs voted against the treaty along with one Centre Party MP.
According to Swedish Left Party MEP Jens Holm:
“The fact that Sweden waited so long before ratifying the Lisbon Treaty is an indication of the widespread criticism of it. Despite this, it was disappointing that the Left Party and the Greens did not succeed in rallying at least a few Social Democrats behind the demand to postpone the ratification.”
The debate in the parliament was very focused on workers’ rights and collective agreements, and on the proposal for a social progress clause or protocol, as proposed by the European Trade Union Confederation.
Holm said:
“A minimal demand for supporting the Lisbon Treaty is to get binding guarantees for trade union rights. We don’t want any new Laval cases. Unfortunately, the decision of the Riksdag will not result in any such guarantee.”
He concluded on an optimistic note, though:
“We in the Left Party and trade union activists are now watching with great interest what happens in Ireland. We hope that the resistance remains strong. The Lisbon Treaty and its neo-liberalism must be resisted.”

CZECH RULING
Meanwhile, the Constitutional Court of the Czech Republic has said that the articles of the Lisbon Treaty referred to them by the senate do not conflict with the Czech Constitution, while leaving it open to the senate or parliament to refer additional articles to them for consideration.
The way is now clear for the parliament and senate to ratify the treaty but a majority is not guaranteed, particularly in the senate where a lot of opposition to the treaty remains.
The president of the Czech Republic, Vaclav Klaus, has said that, in any case, he will not sign off on the ratification of the Treaty before Ireland ratifies it.