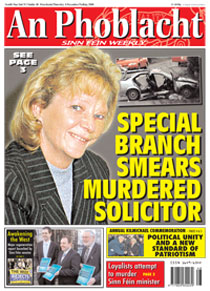 ANONYMOUS claims by a Special Branch witness to the Rosemary Nelson Inquiry, that the murdered Lurgan solicitor passed information to the IRA, have been met with outrage from within the nationalist community.
The inquiry is investigating the March 1999 murder of the 40-year-old solicitor and it was established as a result of allegations of official collusion between unionist paramilitaries and official crown forces in her killing.
Describing the latest claims as, “outrageous”, Sinn Féin Upper Bann Assembly member John O’Dowd, speaking to An Phoblacht, accused the former RUC Special Branch operative of making false allegations, “similar to the allegations the RUC bandied about in the run up to Rosemary’s assassination in 1999”.
Nelson was killed, by a car bomb outside her home in Lurgan, County Armagh, in 1999. A unionist killer gang calling itself the Red Hand Defenders, used variously as a cover name for the UDA and LVF claimed responsibility for the killing.
As a result of her defence work, representing clients in a number of high profile cases, including the Garvaghy Road Residents’ Coalition in nearby Portadown in the long-running Drumcree conflict with the Orange Order, Nelson was the target of harassment and death threats from members of the RUC.

CLAIMS
The former Special Branch officer claimed in his evidence to the Nelson inquiry, on Monday 1 December, that Nelson, “was passing sensitive information to [others] engaged in violence”.
Hiding behind the cloak of anonymity the former RUC man went further and claimed that the Lurgan-based human rights advocate was, “having an affair” with a client, Colin Duffy.
Nelson successfully represented Duffy when he faced false charges of killing two RUC members in Lurgan in 1997. The charges against Duffy were eventually thrown out of court.
The officer said he had received intelligence that Nelson and Duffy had met in at Demesne Avenue, which was described as a loyalist area.
Under the terms of the inquiry the Nelson family’s legal representative cannot cross-examine the witnesses. However, Barra McGrory, the family’s solicitor, in a statement issued to the media, said of the Special branch allegations:
“There is no evidential basis for this belief which is apparently held on the strength of unnamed and unidentified sources who for all we know could have been from the loyalist community who were deliberately spreading these malicious rumours about Rosemary Nelson.”

RUC DEATH THREATS
Rosemary Nelson was a solicitor who saw her primary objective as that of upholding the law and representing her clients. The residents of Garvaghy Road, the family of Robert Hamill, beaten to death by a loyalist mob in Portadown in 1997 and the family of Sam Marshall, shot dead by the UVF, were among her clients.
She was targeted for special attention by members of of the RUC and the then Ulster Defence Regiment of the British Army who threatened her life on numerous occasions.
Many of Nelson’s clients were told while they were being interrogated by the RUC that Rosemary would be killed. She continued her advocacy until, eventually in March 1999 she was assassinated.
Prior to her death the UN sent a Special Rapporteur, Param Cumaraswamy, to examine the allegations of crown forces harassment against Rosemary Nelson and her clients. Cumaraswamy viewed the evidence he gathered as to be so serious that he wrote in his report to the United Nations Commission on Human Rights in April 1998 –11 months before Rosemary was killed – “the RUC has engaged in activities which constitute intimidation, hindrance, harassment or improper interference”, with solicitors.

FACELESS SECUROCRATS
Sinn Féin’s John O’Dowd this week voiced what most nationalists believe when he said of this latest attempt by the RUC to vilify a woman who stood up to them, “the British State directly and through its pseudo gangs planned and carried out the murder of Rosemary Nelson. Having been widely exposed by the evidence being given at the inquiry their defence now seems to be that, not satisfied with murdering Rosemary, they are now trying to assassinate her character.
“It is telling that the individual who made these allegations without producing a shred of evidence is cowardly for hiding behind the cloak of anonymity. That says more about his lack of character than anything else.”
O’Dowd concluded saying, “while it is unusual to comment on ongoing legal proceedings the attempt by a faceless British securocrat to slander the memory of a much loved wife, mother, daughter and sister cannot pass without a robust challenge”.