Support for International Day for the Eradication of Violence Against Women 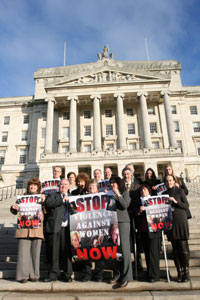 SINN FÉIN MLAs gathered on the steps of Stormont on Tuesday to mark International Day for the Eradication of Violence Against Women day.
West Belfast MLA and party spokesperson on Women, Jennifer McCann, said:
“The International Day for the Eradication of Violence Against Women is to highlight the ongoing and high levels of violence against women internationally. One in three women will experience violence against them at some point in their lifetime. This is a staggering figure.
“At home, violence against women and young girls has been highlighted recently in the media with a rise in the amount of sexual assaults against women. Every week we are hearing reports in the media of rape or serious assaults. There are many more attacks that go unreported and these figures of course do not mark assault of a non-sexual nature against women such as domestic violence.
“Perpetrators of the crime of rape, sexual assault and domestic violence are very rarely brought to justice and even when they are in front of the courts they are allowed to put their victims through further trauma by making them relive the whole nightmare again in open court.”

LENGTH OF SENTENCES
The West Belfast MLA also said the sentences handed down by judges rarely reflect the seriousness of the crime.
The impact and effects of  these crimes, Jennifer McCann said, are far-reaching and may include loss of self-esteem and self-worth, onset or exacerbation of mental health problems, nightmares, panic attacks and anxiety, flashbacks and disengagement from family, social and community life.
“There is an onus on the PSNI and the criminal justice system has to make women and young girls feel safe and confident about coming forward to report these crimes. Survivors need to know that they will have access to justice and that the perpetrators will serve sentences that will reflect the devastating effects that their crimes have on their victims.
“As community and political representatives, we need to ensure that the policies and strategies of government departments are enforced with vigour and translated into action on the ground to combat the crime of rape, sexual violence and domestic violence and that adequate resources are given to provide services for survivors.
“Organisations like the Rape Crisis Centre in Belfast should be given the funding and resources they need to provide the excellent frontline services they deliver to the many victims and survivors who use them.
“We all need to work together on this issue to send a clear message out that violent crimes of whatever nature against women will no longer be tolerated. Women need to feel safe in their everyday lives.”
An Phoblacht
44 Parnell Sq.
Dublin 1
Ireland