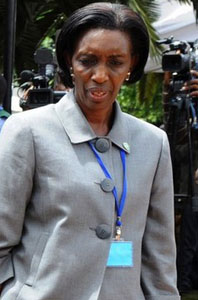 France Still in Denial on 1994 Genocide

ON SUNDAY, 9 November, German police arrested a senior Rwandan government official at Frankfurt airport, on foot of a French extradition warrant dating back to 2006.
The woman arrested was Rose Kabuye, chief of protocol for Rwandan president Paul Kagame and a former officer in the Rwandan Patriotic Front (RPF), the rebel force that drove the genocidal Interhamwe from Rwanda in 1994.
In just a few short weeks in April 1994 the Interhamwe – a state militia – had organised and carried out the slaughter of over 800,000 people, members of the minority Tutsi ethnic grouping, those who harboured them and those deemed to be opposed to the hate-based politics of the Interhamwe.
It now appears that German authorities had informed Kabuye of their intention to act on the outstanding 2006 French warrant, prior to her departure for Frankfurt – to prepare for a Kagame state visit – but Kabuye chose to proceed.
More unusual is that upon arrest Kabuye waived her right to an extradition hearing – which could well have ruled against deportation to France – and actually demanded that she be transferred to Paris.
Kabuye – along with nine other senior Rwandan government officials  – had been indicted by a French ‘anti-terrorist’ judge for the assassination of then Rwandan president Juvenal Habyarimana, in April 1994. All indicted were then senior figures in the RPF that was battling his regime.
It is widely accepted that Habyarimana’s murder on April 6 – his plane was shot down near Kigali airport – acted as an agreed ‘trigger’ for the start of the slaughter.
It is also understood that at the time of his murder, President Habyarimana had been on his way to sign peace accords that would have seen representatives of the minority Tutsi community gain a greater presence and voice in government. This was anathema to the extremist Interhamwe, which used Hutu ethnicity as a cover for their desire to maintain power.
Habyarimana’s plane had a French crew who were also killed, which prompted the French ‘anti-terrorist’ investigation, which in turn prompted the 2006 French ‘finding’ that senior officers in the RPF had targeted the presidential plane in order to aggravate ethnic tensions, thereby provoking the genocide and also providing a pretext for the RPF seizure of power.
As conspiracy theories go, it was rather on the elaborate and convoluted side, but it has the full force of the French judiciary behind it.
Indeed, the 2006 ‘finding’ was at once both remarkable and convenient. Remarkable, in that no other country in the world has come to the same conclusion and convenient in so far as it serves to camouflage the French role in assisting and protecting the authors and organisers of the 1994 genocide.
This, of course, helps explain the response of Rose Kabuye on her arrest. As one Rwandan official explained, “This is the moment of truth for France...it is using these indictments to cover up its own responsibility. France aided and abetted the genocide planners. It has continued to shelter the genocidaires.”
France has a long colonial history in Rwanda and neighbouring countries and when the RPF began its campaign in 1990, Paris rushed to shore up the regime in Kigali with military aid and support. Their intervention kept the regime in power.
Yet, as the 1994 genocide unfolded France seemed utterly powerless, despite having a military presence in the country and links with the Interhamwe organisers of the mass killing. It has subsequently been alleged that France blocked international efforts to respond, as this would have necessarily entailed deposing the regime it propped up.
With the international community standing by, the only force that was capable of stopping the slaughter was the RPF and by June its forces had effectively driven the Interhamwe into the south west of the country.
On June 18, France announced its intention to set up a safe haven for civilians, in southwestern Rwanda. It is now clear their intention - with UN backing – was to protect their old allies and the authors of the genocide. When the international force arrived on June 23 their chief task, unbeknownst to many, was to provide a safe haven for mass murderers.
They later provided safe passage for the same forces into what is now the Democratic Republic of Congo. To the eternal shame of the international community, a massive aid effort was then launched to assist those in the camps in DR Congo – many still active Interhamwe members – while the survivors of genocide in Rwanda were largely ignored and the country cast in the role of an aggressor and international pariah.
In August 2008, a Rwandan government report formally named former President Mitterrand, the former French prime minister Edouard Balladur and other still active, still prominent politicians as having played a role in supporting, arming and assisting those who murdered 800,000 people, in 1994.
Justice was denied in 2004 and is denied to this day. And this failure continues to reverberate across the region: the roots of the current crisis in DR Congo lie in the 1994 Rwandan genocide and the utter failure to track down and prosecute those responsible – alive and well and living in  Britain, France and Belgium, to name but three countries where they have set up home, free from prosecution.