Why Sinn Féin did not support Credit Institutions Scheme 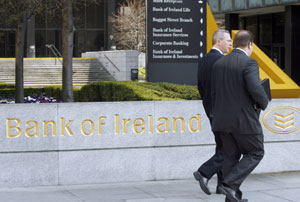 BUSINESS AS USUAL: Families are facing repossession of their homes because of bad banking practice

WHEN the state guarantee to banks and other lending institutions as emergency legislation to avert a potential collapse in the Irish financial sector was first brought before the Dáil as the Credit Institutions Bill, on 30 September, the Sinn Féin group in the Oireachtas supported it... with conditions.
Finance spokesperson Arthur Morgan TD said the scheme had to include measures – such as help for homeowners facing repossession and a windfall tax on banks’ profits to go back to the taxpayer – if Sinn Féin was to vote for it. It didn’t include those measures and the Sinn Féin TDs accordingly voted against it on 17 October.
Arthur Morgan outlined the failure of the terms and conditions to provide a real return for the taxpayer. He also highlighted that there were no new provisions in the scheme to address the increasing number of home repossessions going through the courts. He stated:
“A panel is being set up to monitor the banks’ practice; surely an arbitration committee could have been set up immediately to make sure banks are doing everything possible to refrain from repossessing, even if it is offering interest only repayments in the current climate.”
Setting out the party’s position, Arthur Morgan explained:
“When the Credit Institutions Bill came before the Dáil, the Sinn Féin party supported it. We did so because we believed that it was entirely necessary to stabilise the state’s banking system and we believe that our read of that situation has been proven correct. Since its implementation we have neither lost a bank nor been forced into bailing out a bank with hard cash.
“However, Sinn Féin stated that we had a number of reservations regarding the ambiguity over the guarantee’s terms and conditions. I met with Finance Minister Brian Lenihan to express Sinn Féin’s concerns and was reassured that the taxpayer would see adequate remuneration for their insurance scheme for the banking sector.
“When Sinn Féin received a copy of the draft scheme, we examined it on its own merits, leaving aside our reservations about supporting anything produced by the Government in the wake of the savage Budget. Sinn Féin wanted to see terms that included a windfall payment to the state, the introduction of a bank levy and an onus on banks to negotiate as much as possible with homeowners facing repossession.
“There is in fact no real return whatsoever for the taxpayer arising from this document. The financial remuneration only accounts for the estimated increase in debt funding costs arising as a result of the guarantee. If you buy a car for €30,000, your average insurance broker will charge you €600 per annum to insure it – approximately 2 per cent of its value. This is the very least in terms of commercial interest rates that should have been applied to the banks for this guarantee, regardless of whether or not money had to be drawn down from the scheme.
“Furthermore, the only sanctions that appear to be in place for the banks who abuse the guarantee, is expulsion from the scheme, and even then only after 90 days’ notice. There is no mention of fines for banks who gamble with taxpayers’ money, let alone provision for the state to take legal action against such an institution. We witnessed within days of this guarantee being announced conduct unbecoming in one of the banks to be covered. Are we to accept that if such an event were to happen again that the worst punishment the bank would receive would be its removal from the scheme?
“Sinn Féin cannot accept that the only provision applying to hard-pressed home-owners is the reference to the banks complying with the IBF’s voluntary code of practice on mortgage arrears. This code represents what the lender will endeavour to do in normal circumstances. These are not normal circumstances.
“There were almost 50 repossessions in the week the scheme was published. A panel is being set up to monitor the banks’ practice; surely an arbitration committee could have been set up immediately to make sure banks are doing everything possible to refrain from repossessing, even if it is offering interest only repayments in the current climate.
“While I recognise the legal necessities surrounding mortgage contracts and the fact that not every homeowner can be given licence to withhold mortgage payments, it does not sit well with me that while we can throw away the rule book to guarantee banks that are clearly guilty of unprofessional practice, we cannot simultaneously provide some level of insurance for homeowners.
“There is much that is welcome in the scheme regarding transparency and enforcement, but again much that is lacking in terms of follow-through on banks that do not adhere. In addition, much of this rests with the Financial Regulator, the same regulator who has failed so spectacularly in his job to date.
“Sinn Féin’s decision to support the Credit Institutions Bill was not taken lightly, but we did it in the interests of the people of this state and we were right to do so. We would like to have supported the scheme also but the terms and conditions are inadequate and Sinn Féin could not support them.”

HOLE IN THE BILL: There are penalties for bank customers but no fines for the banks