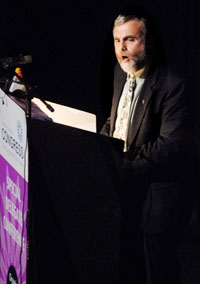 THE Irish Congress of Trade Unions has held a special delegate conference for members of trade unions to vote on whether to accept or reject the social partnership pay deal that would give workers a 3.5 per cent pay increase in the 26 Counties.
The trade unions had initially rejected a deal that would have offered a 5 per cent increase to workers over 21 months but later reached a deal that would provide 6 per cent (6.5 per cent to low-paid workers) which is worth 3.5 per cent year.
The majority of union delegates to the Congress conference voted to accept the deal.
The trade unions are optimistic that the deal will benefit workers as they are expecting inflation to drop massively over the next two years. Public sector workers would have to accept a pay-freeze for 11 months before any pay rise would be applicable to them.
Most of the largest unions in the state voted in favour of accepting the new wage agreement.
SIPTU, IMPACT, the Technical, Engineering and Electrical Union, the Irish Bank Officials’ Association, Mandate, the Irish Nurses’ Organisation, the National Union of Journalists, the Civil Public & Services Union have all accepted the deal.
Unite, the second largest union in the state, refused to back the deal. Members of Unite, voted three to one to reject the draft deal.
In the aftermath of Congress accepting the deal, members of Unite have said worry is now spreading across low-income workers in the 26 Counties, as it has transpired that the social partnership pay deal, if agreed by all parties, may force them to pay the income levy which the Government said they would be excluded from.
It is believed that the 3.5 per cent pay increase which will push some workers on the minimum wage out of the bracket of those excluded from paying the 1 per cent income levy introduced in the recent Budget. When the levy was introduced, all workers were obliged to pay at least the 1 per cent levy. The terms of the levy were later revised to exclude those earning €17,542 per annum – the minimum wage income which a third of the 26 Counties workforce receives.
Regional Secretary of Unite Jimmy Kelly said that the pay deal, if accepted, will push workers back into the income levy nest. “The government change to the levy creates an income trap whereby if you earn anything over the minimum wage, a levy is paid on all of your income. The change appears to be as ill-thought through as the original imposition of the levy.”
An Phoblacht
44 Parnell Sq.
Dublin 1
Ireland