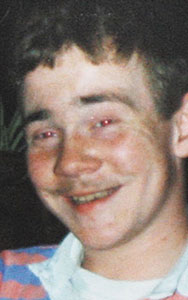 IN 1998, a then Guardian journalist, Roy Greenslade, criticised the British media for ignoring those people, like Catholic teenager Damien Walsh, who had been killed by loyalists.
Delivering a memorial lecture in memory of Damien, Greenslade said that, as far as media coverage was concerned, civilian victims of loyalist violence were consigned to the lowest rank in a hierarchy of victims and as such were largely ignored.
Greenslade suggested the hierarchy emerged as a consequence of the way in which Britain portrays the conflict in Ireland. He argued that a dominant discourse underpinned mechanisms of self-censorship operating within the British media which led not to history being rewritten so much as history being eradicated.
In the 15 years following the killing of Damien Walsh, his family have remained determined to challenge any such eradication not simply by remembering Damien but, more significantly, by struggling to establish the truth about the circumstances of his death.
The killing is currently the subject of investigation by both the Police Ombudsman’s office and the PSNI’s Historical Enquiries Team (HET). The case has also been taken up by British Irish Rights Watch and earlier this month the Walsh family travelled to Stormont to meet with Gerry Adams. To date, no one has ever been charged with Damien’s murder.
Amongst the many concerns which the family has raised is the fact that the HET has been in possession of a DNA sample taken from the balaclava worn by one of Damien’s killers for over two years but has taken no action.
A recent highly critical report into the operation of the HET highlighted the role of ‘intelligence gatekeepers’ in restricting access to information, not only to the families of victims, but also officers tasked with conducting a review of the cases.
Significantly the report showed that within the HET the power to withhold information rested with members of the same intelligence elite that were most closely associated with collusion: Special Branch and British Intelligence.
There can be no doubt that state collusion with loyalist death squads remains the single most damaging fact about Britain’s role in Ireland, a fact the British state remains determined to obscure.

SPECIAL BRANCH AGENT
Damien Walsh was a Catholic teenager killed by loyalist paramilitaries. The killing took place during a period of intense violence in which Catholics were being targeted by loyalist gangs. Hours before the UDA murder of Damien Walsh, four Catholic workmen had been shot dead by the UDA in Castlerock, County Derry.
On the face of it, the murder of Damien Walsh looked like another sectarian killing but then other information began to emerge which suggested there had been elements of collusion in the teenager’s death.
These elements include, the weaponry used, the UDA gang involved, the role of a Special Branch agent, an RUC roadblock, surveillance and the ‘discovery’ of bomb-making material close to the scene.
A 17-year-old on a youth training scheme, Damien Walsh had changed shifts with another employee at the Dairy Farm coal depot where he was working on the outskirts of West Belfast. Damien had changed his shift because he had promised his girlfriend to take her to the cinema the following night.
At 7.30pm on the evening of Thursday 25 March, a UDA gang hijacked a car in the Lower Shankill. A pensioner whose car, a maroon-coloured Vauxhall Astra, had been taken at gunpoint immediately informed the RUC. Despite being given the details of a car in which an armed loyalist gang was travelling within West Belfast, the RUC took no immediate action.

CHECKPOINT REMOVED
Both British military Intelligence and Special Branch had numerous agents working within the UDA in the Shankill. Indeed, loyalist paramilitaries in the Shankill played a key role in the collusion strategy organised by the British Army’s Force Research Unit (FRU). It is highly unlikely that any loyalist gang operating from the Shankill would have been unknown to the RUC.
But in the 35 minutes between the RUC being informed of an imminent loyalist attack and the murder of Damien Walsh, the only action the RUC took was to remove a checkpoint which had been in place for most of the day on the Stewartstown Road, on a route that lies directly between the Shankill and the Dairy Farm Complex where Damien was working.
Within 15 minutes of the checkpoint being removed, the UDA gang drove into the rear of the shopping complex and shot the Catholic teenager. Witnesses said two men armed with an automatic weapon and a pistol got out of a car.
One of the men walked up behind Damien, who was sweeping the floor, and held the automatic weapon to his head but the gun initially jammed.
Damien attempted to run away but the gunman managed to open fire and shot the teenager in the legs. Damien was then shot several times more and died a short time later in hospital.
The RUC arrived at the scene shortly after the gang made their getaway. The car used in the attack was later abandoned in Andersonstown area of West Belfast.
Inside the depot, the RUC made no attempt to administer first aid to Damien. When a first-aider arrived and asked the RUC for access to a medical pack so that he could apply a dressing to the teenager’s wounds, the RUC refused.
According to Damien’s mother, Marian, it was only after a British soldier arrived at the scene that a dressing was applied but by then it was too late.
But while the RUC appeared prepared to let Damien die and made no attempt to pursue his killers, during a follow-up search they ‘discovered’ bomb making material in a unit next to the coal depot.
After Damien’s murder, it was revealed that a Special Branch informer had notified his handlers about the storage of material in the unit and the unit had been placed under surveillance prior to the killing.

SIMILARITIES
According to Relatives for Justice, the killing of Damien Walsh shares elements of collusion similar to that of Roseanne Mallon.
The 76-year-old woman was murdered by a loyalist gang in 1994 under the gaze of undercover British soldiers carrying out surveillance at the scene. The soldiers were under orders not to intervene.
The weapons used in both murders were part of a shipment of weapons brought from South Africa into the north of Ireland by British agents. The weapons were used to rearm loyalist paramilitary groups at the same time as the FRU was reorganising and redirecting loyalist death squads.
In his lecture delivered in memory of Damien Walsh, British journalist Roy Greenslade identified what he saw as the eradication of history in which killings carried out by loyalist paramilitaries were obscured from the public domain.
Greenslade suggested that obscurity was simply the corollary of individual self-censorship by journalists and their editors who saw loyalist violence as a sectarian sideshow on the periphery of Britain’s struggle against the IRA.
But mechanisms of obscurity aside, what is clear is that the avoidance of public scrutiny in all its forms remains a key weapon in the continuing collusion cover-up.

DETERMINED: Damien Walsh's family (flanked by West Belfast MLAs Gerry Adams and Jennifer McCann) have kept up their quest for the truth