Concern at lack of progress on Dáil collusion motion 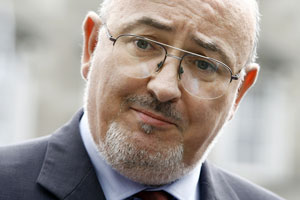 SINN FÉIN Dáil leader Caoimhghín Ó Caoláin has expressed concern at the lack of progress on the part of the British and Irish governments on the motion on collusion passed unanimously by the Dáil on 10 July. He also raised concern over the uncertainty of future funding for the Justice for the Forgotten group. He was commenting after hearing replies from the Taoiseach in the Dáil on Tuesday.
Deputy Ó Caoláin said:
“On 10 July last the Dáil unanimously adopted a motion urging the British Government to allow access by an independent, international judicial figure to all original documents held by the British Government relating to the atrocities that occurred in this State and which were inquired into by Judge Barron, including the Dublin and Monaghan bombings of May 1974. This resolution, together with the Barron reports, was sent to the Clerk of the House of Commons but the Taoiseach was not able to report any progress on it. It was left to the Ceann Comhairle to tell the Dáil that the Clerk of the Commons had simply acknowledged and stated that it was a matter for the British government.
“I am very concerned about the lack of pro-activity by the Taoiseach and Government on this issue. The weight of the Dáil motion on collusion needs to be impressed on the British Prime Minister. The British government needs to acknowledge the systematic role of its forces in acts of collusion in which unionist paramilitaries were used as surrogates to carry out fatal attacks in the 26 Counties.
“I am also very concerned about the lack of clarity on funding for Justice for the Forgotten in 2009. Justice for the Forgotten has done a huge amount of work campaigning for truth and justice on the Dublin and Monaghan bombings of May 1974, the Dublin bombings of 1972 and ‘73 and other fatal attacks involving collusion in this State. It has given practical assistance to survivors and to the bereaved. Funding for 2009 should have been approved and allocated to Justice for the Forgotten before now and the Taoiseach’s reply today indicated to me that there is doubt over any future funding at all. I have urged him to allocate funding for Justice for the Forgotten so that they can continue and complete their vital work.”