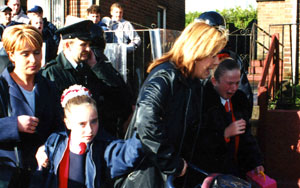 A CASE challenging the RUC’s handling of the loyalist blockade of Holy Cross Catholic Primary School in north Belfast in 2001 is to be taken to the European Court of Human Rights.
Lawyers acting on behalf of a parent of a pupil declared their intention to pursue the case following a rejection from the British House of Lords.
Last week, British Law Lords refused to admonish the failure of the RUC to protect children, some as young as four years of age, from being subjected to inhumane and degrading treatment during a sectarian blockade of a Catholic school.
A loyalist campaign of sectarian intimidation of schoolchildren attending Holy Cross began in the summer of 2001. For three months, schoolchildren and their parents were subjected to the vilest sectarian abuse and violence from loyalist paramilitaries and unionist residents whose homes they had to pass on their way to school.
Unionists blew whistles, threw bottles, stones and urine-filled balloons, held placards with lewd sectarian slogans, shouted sectarian abuse and issued death threats to parents and their children. In the most serious incidents, fireworks and blast-bombs were thrown, on one occasion injuring a member of the RUC.

MEDIA PORTRAYAL
Initially, the British media attempted to portray the blockade as a dispute between two rival factions but film footage of five-year-old girls being attacked by a sectarian mob exposed the lie.
Day after day, the RUC allowed loyalist ‘protesters’ to gather close enough to hurl abuse and missiles at the children, their parents and local priests accompanying them. Public pressure and international outcry eventually ended the blockade.
In 2004, a mother of one of the schoolchildren took a legal challenge against the RUC on the grounds that their policing of the blockade had led to her daughter being subjected to inhumane and degrading treatment.
The case was rejected by the Belfast High Court in 2006 and reached the British House of Lords in June of this year. Delivering their ruling, five British Law Lords dismissed the case last week.
The judgement repeated many of the flawed notions initially peddled by the British media, most notably the characterisation of what was happening as a “community dispute” rather than a human rights issue.
One of the Law Lords, Baroness Hale, declared:
“In a highly-charged community dispute, such as this, it is easy to find fault with what the authorities have done when the real responsibility lies elsewhere.”
Of course, this is absolute nonsense. Ensuring the right of Catholic schoolchildren to walk to school unmolested is the responsibility of the authorities and a refusal to recognise that responsibility left the vulnerable at the mercy of the mob.
The hostility of the British courts to acknowledge the case as a human rights issue was further compounded by criticism of the Human Rights Commission. Their submission was dismissed by the British Law Lords who publicly admonished the commission for wasting their time.
This overt antagonism was all the more curious given the fact that the Human Rights Commission had intervened to challenge the Appeal Court’s application of a legal test and had been vindicated when the Law Lords accepted it had been incorrect.

RUC WAS RIGHT
In their ruling, the British Law Lords admitted that events witnessed by the children had been “terrifying” and accepted that the motivation of the mob was sectarian. But the House of Lords refused to accept that the RUC should have held the mob further back or made arrests as a deterrent.
Instead, the Law Lords relied upon their own, highly questionable, notion of the RUC being “uniquely placed through their experience and intelligence to make a judgement on the wisest course to take in all circumstances.”
In other words, the Law Lords were not basing their ruling on the merits of the case but upon their own determination that the RUC, whatever they did, would always be right. It’s a curious position for the judiciary to adopt because it undermines its own raison d’etre by removing the need to make a judgement.
Commenting after the House of Lords ruling, the lawyer acting for the family, Fearghal Shiels, said the case would be brought before the European Court of Human Rights.
“It is difficult to reconcile the fact that the House clearly accepted that the children were subjected to inhumane and degrading treatment yet concluded that permitting a protest to take place which the police admitted was illegal was upholding the rule of law.”