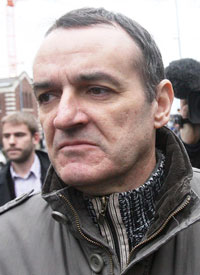 BASQUE nationalist Iñaki de Juana Chaos voluntarily appeared in court in Belfast on Monday, 17 November, following the issuing of a European arrest warrant by the Spanish Government to the PSNI on Thursday, 13 November. The Spanish warrant states that, on 2 August, de Juana Chaos, a former ETA prisoner, gave a woman a letter to be read out in his name at a rally in San Sebastian in Euskal Herria (the Basque Country) which “praised terrorism”.
De Juana Chaos, who the court heard has been living in Belfast for the past six weeks, was released on bail and will reappear in court on 28 November, where he has said he will fight extradition proceedings launched against him by the Spanish authorities.
This is not the first time the Spanish Government has tried to keep de Juana Chaos behind bars on dubious legal grounds. In 2006, when he had served 18 years in jail for his role in ETA attacks on Spanish military and police targets during the 1980s and was due for release, he was sentenced to a further 12 years for two articles published in the Basque pro-independence newspaper, Gara, which the Audiencia Nacional (Spain’s highest court) claimed were “threatening” to the well-known public political and judicial figures he criticised (“targets”).
Following hunger strikes in protest at the new charge and jail term in which he came close to death, de Juana Chaos’s sentence was reduced to three years which he finished serving on 2 August this year – when the offending letter was read out at a rally that de Juana Chaos wasn’t present at celebrating his release.
The Spanish authorities admit they do not have this letter and de Juana Chaos’s defence lawyers stated in court in Belfast that he did not authorise anyone to speak on his behalf at the rally.
The comment in question allegedly read out at the rally - “Aurrera bolie!” – is a Basque footballing expression meaning “Kick it up the field!”, which Spanish authorities insist amounts to an incitement to terrorism.
So the Spanish Government is basing its legal effort to extradite de Juana Chaos on somebody at a rally in San Sebastian saying “Kick it up the field!” without any evidence that the comment was de Juana Chaos’s or that it somehow constitutes a terrorist offence.
De Juana Chaos’s defence lawyers described the arrest warrant as “fundamentally flawed” and said that the Spanish Government “have clearly made an error in law”.

CONTINUED HARASSMENT
The continued harassment of de Juana Chaos comes at a time of heightened political repression in the Basque Country, with Spanish Prime Minister José Luis Rodríguez Zapatero’s government last year banning the political parties the Communist Party of the Basque Homeland (EHAK) and Basque Nationalist Action (ANV) and youth organisations including SEGI, following the 2003 “permanent ban” on Batasuna.
The banning of Batasuna, which usually polls between 10 and 20 per cent of the vote in Euskal Herria,  marked the first time since the 1975 death of the fascist dictator General Franco that a political party has been banned in the Spanish state. There are currently more than 700 pro-independence Basque activists in Spanish jails.

Protest outside the court in Belfast