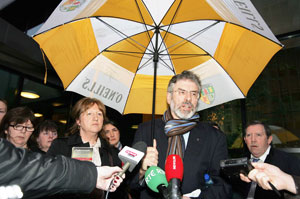 FAMILIES from the Ballymurphy Massacre Committee, accompanied by representatives of Relatives for Justice and Sinn Féin West Belfast MP Gerry Adams MLA, met Foreign Affairs Minister Dermot Ahern in Belfast on Monday.
The meeting was requested by the Sinn Féin MP to provide the families with an opportunity to ask the Irish Government for its support for an independent investigation into the full circumstances of these deaths and an acknowledgement of the innocence of all those killed and of the injustice suffered by the families.
Speaking after the meeting, Adams said the families made a compelling appeal for assistance and support:
“In the three days following the introduction of internment in August 1971, 11 people were killed by the British Army’s Parachute Regiment in the Ballymurphy area.
“The families of those killed deserve an apology from the British Government and the truth about the circumstances surrounding the massacre of their loved ones.”