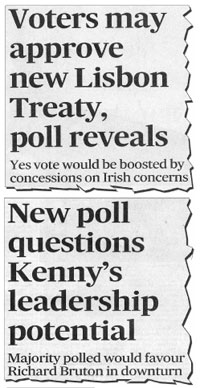 FOUR consecutive days of front page opinion poll articles in the Irish Times have focused 26-County news coverage in the last week. The level of coverage, intent and subject matter of the questions leave the Times open to questions about the paper’s impartiality and political agenda.
The poll conducted by TNS mrbi on behalf of the Times covered the now stock issues such as political party support and leader satisfaction ratings, but also asked some contentious hypothetical questions on the leadership of Fianna Fáil and Fine Gael, while distorted questions on the Lisbon Treaty topped off a week where it seems that the paper has entered the realm of negative push polling – trying to set political agendas rather than actually report on them.
The findings that Fianna Fáil party support had dropped to 27% down 15% on the previous TNS mrbi poll had been echoed in a 26 October Red C/Sunday Business Post poll which showed Fianna Fáil down 10% to 26% and Fine Gael up 5% to 33%.
Fine Gael also rose in last weeks Times poll up 11% to 34%.
The following day the Times front page headline read “New poll questions Kenny’s leadership potential. Respondents had been asked “would Enda Kenny or Richard Bruton be the better leader in this economic downturn” and then “would Bertie Ahern or Brian Cowen be the better leader in this economic downturn”.
The first issue is why table these questions, then why reverse the party leader position across the questions? Kenny is mentioned first in the Fine Gael question and Cowen is mentioned second in the Fianna Fáil one. Finally why not ask the same question about Sinn Féin, Labour Party and the Greens. Could the Times have a pro-Labour Party Agenda?

Facts ignored
The Times opinion piece claims that, “It is impossible to ignore Enda Kenny’s consistently poor showing in the opinion polls”, but they go on to ignore all the other party leaders. The highest satisfaction rating for any leaders in their previous day’s poll was Labour’s Eamon Gilmore at 38%, the lowest Brian Cowen at 26% and, though Gilmore was up in this poll, he is still down on the 40% satisfaction rating recorded by the TNS mrbi in May 2008. The Times ignore this or the fact that Labour support had fallen from 15% to 14% in this poll.
One of the paper’s key columnists and assistant editor Fintan O’Toole wrote this week on how a “Fine Gael-led Government would hit the public services even harder than the coalition”. This maybe be true, but what about an in-depth study of Labour who were so desperate to go into coalition with Fine Gael in 2007, they signed an unprecedented pre-election pact with the party?
Then onto the Irish Times’ other hobby horse, their support for the Lisbon Treaty, “Voters may approve new Lisbon Treaty” was Monday’s front page headline this week, created by would you vote Yes or No “If the Lisbon treaty is modified to allow Ireland retain an EU Commissioner and other Irish concerns on neutrality, abortion, and taxation”.
Their own poll in June did not raise taxation, or abortion as significant issues, neither did the Gallup EU Commission poll after the referendum, so why are the Times tagging these issues on now?