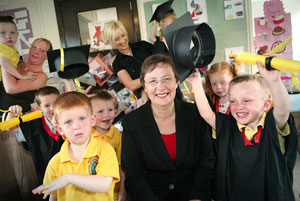 BAIRBRE DE BRÚN, Sinn Féin Member of the European Parliament (MEP), for the Six Counties has been reselected as the party’s candidate for the 2009 EU elections.
Here, Bairbre, an active republican for the past 30 years, speaks about her long history of activism, her work in the European Parliament, her campaigning for the Irish language, and her starring role in the BBC satire, Folks on the Hill.

BAIRBRE DE BRÚN was born and brought up in the south Dublin area of Terenure. Her connection to West Belfast was formed long before she moved here as her mother came from Albert Street, in the Lower Falls.
Bairbre moved to West Belfast in 1979 and lived in a flat in the Whiterock before moving to Andersonstown, where she has lived ever since.
She became active in the Relatives’ Action Committees (RAC), set up to campaign against the inhuman treatment of republican prisoners of war held in British jails and, during the period of the Hunger Strikes, she was also very active in the Anti-H-Block/Armagh Committee.
After the Hunger Strike she became a member of Sinn Féin, joining Cumann Feirste, the Sinn Féin cumann that covers the Riverdale and Stockman’s area of West Belfast.

‘RIGHT TO FUEL’
From 1981 to 1984, Bairbre was involved with Liz Maskey, Tish Holland and others in a West Belfast benefit take-up campaign and a ‘Right to Fuel’ campaign to combat fuel poverty. The campaign was very strongly influenced by the late Eileen Howell, a long-standing community activist and chair of the Falls Community Council
In 1983, she was involved in the setting up of the Connolly House constituency office, along with the likes of Alex Maskey, Padraig Wilson, Harry Hanley and Phil McCullough.
“My duties included giving the place a good clean when we took it over,”
Bairbre laughs.
We asked Bairbre to talk about her work for Sinn Féin throughout the 1980s and into the early 1990s.
“I was secretary of the West Belfast Comhairle Ceantair from 1983 to 1985. Paddy Molloy was the chair and Chip Fusco, Seán Keenan and Padraig Wilson were involved along with others.
“I was based in Connolly House and I also helped out in the constituency office, working with Alex Maskey and Marie Moore.
“I moved to the Falls Road office in 1985 to work as the Six-County publicity officer. Danny Morrison was National Director of Publicity at the time. It was a very challenging role and I remained there for over three years because I was still there when censorship was imposed by Margaret Thatcher’s government.
“I was also involved with the party’s Women’s Department throughout the 1980s. Many women had seen their role as a supporting role and while they were active in community organisations there were not enough women in the party.
“Under the leadership of Rita O’Hare we organised the department and got more women involved in Sinn Féin. I remember republican activists such as Briege Brownlee from St James’s being involved in the Women’s Department and also in the Falls Women’s Centre, which was a very important development in West Belfast.’

ROINN AN CHULTÚIR
Bairbre became head of the Sinn Féin Roinn an Chultúir (Cultural Department) in 1990.
“The Cultural Department was mainly concerned with the promotion of the Irish language and we worked very closely with the growing Irish-language community.
“The work carried out by Roinn an Chultúir in its early years included publishing a weekly Irish-language news-sheet, Nuacht, and we spearheaded the campaign for bi-lingual street names in West Belfast.
“We also organised regular Irish-language classes”.
Roinn an Chultir also established the annual Sinn Féin Slógadh, and supported a range of campaigns organised by the major Irish-language organisations across Ireland.”
Bairbre was also a founding member of the West Belfast Glór na nGael Committee.
“We entered an all-Ireland competition that aimed to find the area doing most to promote the Irish language in everyday life and we won the major prize – in 1986 and again in 1990.
“In August 1990, funding was terminated for the workers employed by Glór na nGael when a number of grassroots community organisations had their funding withdrawn in what became known as the ‘political vetting’ of community groups by British minister Douglas Hurd.
“It bears striking similarities to what is happening at this present moment with Department for Social Development Minister Margaret Ritchie threatening to axe vital community services right across West Belfast.”

IRISH PEACE PROCESS
Bairbre joined Sinn Féin’s International Department in the late 1980s and travelled widely to promote the Sinn Féin peace strategy.
“The party brought out A Scenario for Peace in 1987 and Towards a Lasting Peace in 1990. These two documents  – produced by leading republicans such as Gerry Adams, Tom Hartley, Jim Gibney and Martin McGuinness – set out the need for a peace process and for the Dublin Government and other parties to play their part along with international organisations.
“I travelled to meet with political groupings in other countries and to strengthen support networks, for example in Canada, where I spent a considerable amount of time.”
The workload of the International Department trebled after the IRA cessation of 31 August 1994.
“I remember going up to Connolly House on the announcement of the cessation. There were thousands gathered outside and I remember the feeling of hope, optimism and pride in the achievement of the republican leadership in bringing the Irish Peace Process centre-stage and making the IRA initiative possible.
“Everyone realised how historic the moment was with the creation of an opportunity for peace.
“I was teaching in Meanscoil Feirste at the time, when it was based in the Culturlann, and I had to balance my increased workload in the International Department with my work as an Irish teacher.”

NEGOTIATIONS
In 1997, Bairbre was a member of the Sinn Féin negotiating team that brokered the Good Friday Agreement.
“I took a year out from teaching to go on the business committee of the negotiations along with Martin McGuinness.
“I worked particularly on all-Ireland, human rights, equality and policing issues.
“After the signing of the Good Friday Agreement I stood for election to the Assembly for West Belfast and I was elected along with Gerry Adams, Alex Maskey and Sue Ramsey.
“We then went into a torturous period of forcing a very reluctant British Government to honour their part of the agreement and set up the Executive and implement all other parts of the Good Friday Agreement.
“There were many difficult periods and false starts. The Brits hadn’t even started to release POWs, never mind make a start on demilitarisation, the Irish language and human rights sections of the agreement.
“When you are in the middle of all this it doesn’t feel like you are making progress; it’s only when you look back you realise how much was achieved by standing your ground.”

MINISTER FOR HEALTH
In December 1999, the Executive was set up and Bairbre was nominated as the Minister for Health, Social Services and Public Safety.
“In the first Executive, Sinn Féin had two ministers: myself and Martin McGuinness, who was Education Minister.
“Unionists told their followers that Sinn Féin wouldn’t have any real say and then we ended up with two of the most vital posts in terms of impact on people’s lives.
“I was also a member of the North/South Ministerial Council alongside Micheál Martin, the Dublin Government Minister for Health.
“Sinn Féin has been the party to the fore in pushing out the boundaries of all-Ireland work in civic society, local councils, business, the North/South Ministerial Council and the European Parliament.”

‘ONE COUNTRY, ONE PARTY’
In 2004, Bairbre was chosen as the Sinn Féin candidate for the Six Counties in the European election and she became the first woman ever to be elected to the European Parliament for the Six Counties.
Mary Lou McDonald was elected as the Sinn Féin MEP for Dublin in the same election.
“One of the proudest moments of my life was when the two of us walked into the European Parliament together to represent Ireland – one country, one party.”
Bairbre is involved in vital work representing the interests of Irish people in the European Parliament and in pushing an agenda of social progress and environmental protection in Europe.
“I’ve been pushing strongly that renewable energy should be the centre-point of a growing economy in the North of Ireland in the time ahead,” she says.
“I’ve been working on economic development with specific emphasis on all-Ireland economic development.”
Bairbre is also working on waste management issues, promoting recycling and opposing incineration.
“I am a member of the EU committee on climate change and I have travelled to China and the United States to promote measures to combat the damage being done to the atmosphere.
“Other issues I am involved in are anti-racism, health and safety, nutrition and anti-poverty and I have brought many delegations from Ireland and from west Belfast over to the parliament.
“These include the families of victims of British state murder and collusion, families bereaved through suicide, autism campaigners, Disability Action, economic development groups, women’s groups and Irish-language organisations.

ACHT NA GAEILGE
Bairbre has been a life-long campaigner to promote the Irish language.
“I was centrally involved in the campaign to secure the status of ‘official working language of the EU’ for the Irish language.
“This now means that when I speak in the EU parliament, in Irish, what I say is simultaneously translated into 22 other languages
“This gives a status not only to the language but also to speakers. It also creates job opportunities, and career guidance teachers here should be aware of those opportunities for both translators and interpreters.”
She has been involved in the campaign for an Acht na Gaeilge.
“One of the issues we have raised is the refusal of the DUP to implement Acht na Gaeilge. We will continue to campaign until the Acht is achieved.”

FOLKS ON THE HILL
We asked Bairbre about her starring role on the BBC political satire series, Folks on the Hill.
“People who come to me to talk fall into two categories – those who are very interested in politics, who see me on the news or in newspapers, or are connected to the work I’ve been involved in, and those who say, ‘I love watching you in Folks on the Hill!’
“I think the character is hilarious. I suppose no one ever thinks that it is an accurate reflection but I certainly think they have got my voice right,” laughs Bairbre.
“When I became a minister I bought a new suit and scarf and they used it for a long time – it was the bright green one!
“The show is very witty and the humour is as sharp as it comes and you need to be able to take it well.”