North's Executive to meet as devolution of powers agreed 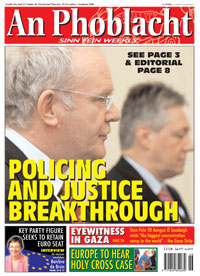 THE North’s joint first ministers, Martin McGuinness of Sinn Féin and Peter Robinson of the DUP confirmed on Tuesday that an agreement had been reached to break the recent political impasse in the North and to devolve policing and justice powers from Britain to the Six County Executive.
The agreement will see a series of moves that within a period of months will result in the creation of a new Department of Justice for the North, and follows meetings within the DUP and a Sinn Féin Ard Chomhairle meeting last weekend at which justice devolution, education reform and other major issues were discussed.
Martin McGuinness and Peter Robinson released documents on Tuesday detailing the process that will lead to the devolution of policing and justice powers. They named West Belfast man John Larkin as the person to be appointed as Attorney General for the Six Counties.
The Assembly and Executive Review Committee (AERC) will now prepare the way for the creation of a new Department of Justice. The process will include negotiations and the selection of a justice minister, the preparation of legislation at Westminster and negotiations with British Prime Minister Gordon Brown on securing financial support for the new ministry. Under the instructions passed to the AERC, responsibility for judicial appointments will rest with the Judicial Appointments Commission in order to ensure the independence of the judiciary in the Six Counties.
The AERC will report before Christmas. The Assembly will debate the issue in January. It will take the Assembly three months to process the necessary legislation. At end of that period barriers to the devolution of policing and justice powers will have been removed, allowing the transfer of powers to take place.
Any Justice Minister elected in the period up to May 2012 would require the support of a majority of Assembly members, including a majority of nationalist MLAs and a majority of unionist MLAs. If during this period a vacancy in the office occurred, it would be filled in the same way.
These arrangements however are subject to a ‘sunset clause’ which would bring them to an end not later than May 2012. Following a period of operation they would be reviewed in light of the experience. Permanent arrangements would then be put in place. There would be no fall-back arrangements in place and there would therefore be a necessity for the parties to agree a way forward by this time.
Martin McGuinness and Peter Robinson confirmed the agreement on policing and justice devolution will result in an Executive meeting this Thursday.
Speaking to reporters on Tuesday Martin McGuinness said that “following discussions we have agreed a number of arrangements for the discharge of policing and justice functions by the Assembly”.
The details of these interim measures are contained in a joint letter to the AERC.
“We are both agreed that Policing and Justice functions should be devolved.
“Every leading politician in our community is committed to this outcome. In the past the differences have been about the structures, who would exercise authority and when the powers would be transferred”, McGuinness said.
He went on:
“We have agreed a tranche of measures which, along with our agreement in July, will assist the AERC in completing its modalities report and, we contend, resolves all the publicly expressed concerns about the structures and who would be the Justice Minister.
“Significant progress has been made in resolving these matters. We both want devolution to happen without undue delay.
“We have also agreed that the Executive will meet this Thursday, 20 November and each week until business is up to date. We will then revert to our fortnightly meeting.  There are a significant number of Ministerial papers on Thursday’s agenda.
“Ministers will also discuss the first draft of a paper detailing measures to deal with the financial hardship being faced by many people and related matters, issues which we have been in discussions with the British government on resolving.
“Sinn Féin has been consistent in all of this, the Executive and other political institutions must operate on the basis of equality and partnership. We believe the outworking of the agreements we have reached will allow the uninterrupted functioning of the Executive.
Peter Robinson said the DUP was committed to the transfer of Policing and Justice powers and that in relation to the modalities the party had identified “issues of concern” that needed to be addressed but that,  “this agreed process takes account of all of these requirements”.
Robinson continued: “The agreement we have reached represents a very satisfactory resolution of the most difficult issues relating to the modalities of transferring power and meets all of the publicly expressed concerns.
“We believe these agreements are capable of gaining the confidence of the community and we look to the Prime Minister to make good his commitment of helping to resolve the financial arrangements relating to the devolution of these powers.
“We both want devolution to happen without undue delay. As I said repeatedly but most recently in my contribution to the Westminster Northern Ireland Affairs Select Committee devolution would take place when the modalities are agreed, legislation passed and the community confidence is in place.  But importantly I would add it is the responsibility of political leaders to build public confidence in this process, not simply monitor it. This we are committed to do.
“Consequently we have agreed the process by which such devolution will take place and we are determined to faithfully work through the essential steps we have identified. We intend to consult widely throughout the process and earnestly seek to secure the confidence of the community necessary for the devolution of policing and justice functions.”
The breakthrough on the issue of devolution of policing and justice powers has been welcomed by Taoiseach Brian Cowen and British Prime Minister Gordon Brown.