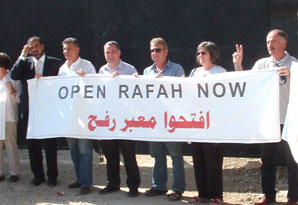 Sinn Féin International Affairs and Human Rights Spokesperson Aengus Ó Snodaigh TD travelled to the Gaza Strip on Thursday 6 November as part of an International delegation of international parliamentarians. The trip was organised by the European Campaign to End the Siege of Gaza.
During the fact-finding mission, Ó Snodaigh met with the Prime Minister of the Palestinian National Authority Salam Fayyad who briefed him on the current political situation and he called for the International community to put pressure on Israel to end it’s blockade of Gaza.
Next week An Phoblacht will carry a special feature on the Sinn Féin TD’s visit to the beleaguered Palestinian region.