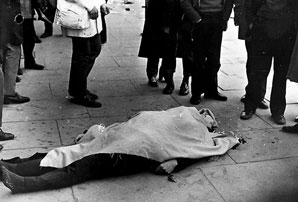 BLOODY SUNDAY, 1972: Families are unlikely to see report into the massacre of Civil Rights marchers by the British Army until 38 years after 'Ireland's Sharpeville'

THE families of those killed and injured on Bloody Sunday have been told delivery of the Saville Inquiry report will be delayed at least for another year.
The inquiry chair informed the families last week that he intends to deliver the report to British Secretary of State Shaun Woodward in the autumn of next year.
The announcement means that it is unlikely that the victims and their families will access the report before 2010 – a staggering 38 years after British paratroopers shot 28 people, 14 fatally, during a Civil Rights march in Derry in January 1972.
A brother of one of those shot dead, Michael McKinney, expressed his disappointment and highlighted the consequences of ongoing delay on many of the victims’ families.
“Already some of those closest to the victims – like my mother, Annie, and Mrs Kelly – have died without getting to hear the truth and without seeing the lies of the British Establishment exposed.”
McKinney pointed out that, with the bulk of the evidence heard by February 2004, the latest delay means it will be six years since the closing of the inquiry before the report will become available to the families.
The announcement of a public inquiry in 1998 by then British Prime Minister Tony Blair followed decades of campaigning by relatives of those killed and injured.
An earlier report by the then British Chief Judge Wiggery, which completely exonerated the actions of British soldiers and included spurious claims that those shot dead were armed rioters, had already been exposed as a whitewash.
The Saville Inquiry formally opened in Derry Guildhall in April 1999 with oral hearings beginning a year later in March 2000. An opening statement by counsel to the inquiry made legal history after it took eight months to deliver, delaying the first witness statement until November of the same year.

ROBERT HAMILL
Meanwhile it has been revealed that an inquiry into the murder of Robert Hamill, a Portadown Catholic beaten to death by a loyalist mob while the RUC refused to intervene, is scheduled to open next January, after four years of delay following a series of legal challenges.
Robert Hamill, his cousin’s husband and two female relatives were walking home after leaving a Catholic community hall when they were attacked by a loyalist mob in April 1997. The two men were beaten unconscious and Robert Hamill died 11 days later after never regaining consciousness. During the attack, one of the women pleaded with a nearby RUC patrol to intervene but she was ignored.
At the time, a British journalist described the sectarian killing as “a casual kind of lynching” and the case was later compared to the racist murder of Stephen Lawrence in England. A series of media revelations suggested RUC collusion in a subsequent cover-up.
In 2001, during the Weston Park negotiations, the British Government agreed to allow Canadian Judge Peter Cory to review the case and make recommendations. Cory delivered his report in 2003 but the British Government delayed publication, citing national security.
Finally forced to concede to Cory’s recommendations, the British rushed through legislation to undermine both the independence and public nature of any subsequent inquiry. As with so many other cases involving British state forces, denial and delay have been the hallmark of the official response.
In July, a judge ordered the British Secretary of State to consider widening the remit of the inquiry into Robert Hamill’s death to include scrutiny of the Public Prosecution Service; last week, Shaun Woodward announced his refusal. He said:
“Having considered all the relevant factors, I have decided it is not in the public interest to widen the inquiry’s terms of reference.”

THOMAS DEVLIN
Scrutiny of the Public Prosecution Service has also become an issue in the case of murdered schoolboy Thomas Devlin. The 15-year-old Catholic was stabbed to death in August 2005 close to his north Belfast home.
Last week, the PPS announced that, following a review of the case, it would not be pursuing charges against six suspects.
Thomas Devlin’s father is angered and disappointed at the news.
“We were assured that there would be a thorough re-examination of the case carried out by a senior member of the PPS.
“A senior official has simply upheld a decision by a junior colleague. There has been no interaction with the murder team, which we specifically requested.”
Files on six suspects were not even examined and a key witness – Thomas’s friend who witnessed the attack – was not contacted.
Despite an attempt by the PSNI to portray the killing as teenage knife crime, suspicions that the attack was sectarian emerged after it became linked to a UVF gang from Mount Vernon.

OPERATION BALLAST
Speaking at the time, Raymond McCord, whose son was murdered by the UVF, said Thomas Devlin’s killers were well-known within loyalist circles. An investigation by the Police Ombudsman exposed a leading Mount Vernon loyalist, Mark Haddock, as a serial killer and Special Branch agent.
Last year, Nuala O’Loan, the then Ombudsman, recommended investigation of evidence that the UVF leader, linked to 19 murders and 10 attempted murders, had been protected from prosecution.
Despite public pressure it took the PSNI five months to announce an investigation into Haddock’s activities. PSNI Chief Hugh Orde announced an investigation by the Historical Enquiries Team codenamed Operation Ballast. Operation Ballast is funded directly by the NIO.
The operation of the HET was recently exposed as fatally flawed following a two-year probe by Dr Patricia Lundy. Despite being described as “one of the most important inquiries in the history of the Troubles”, last week the British Secretary of State refused an application for funding.
Sinn Féin's Alex Maskey said any suggestion that these serious issues will not be dealt with because of a deliberate decision to withhold funding would be a disgrace.

UVF LEADER PAID £5 MILLION
Meanwhile, the PSNI has admitted paying £5m to Ulster Volunteer Force leader Richard Jameson whose construction firm in mid-Ulster was awarded a series of lucrative contracts to work on barracks and prisons.
The contracts were awarded to Jameson despite twice failing police vetting procedures. A third vetting process also resulted in rejection but was over-ridden by the NIO.
At the time, the mid-Ulster UVF were operating in what came to be known as ‘The Murder Triangle’, carrying out numerous sectarian killings including the murder of 76-year-old Roseanne Mallon. It was widely suspected that construction contracts were used as a conduit to fund loyalist terror.
Jameson was shot dead by the breakaway Loyalist Volunteer Force in January 2000. In the ensuing loyalist feud, teenagers David McIlwaine and Andrew Robb were beaten to death by the UVF.
Paul McIlwaine, father of David, said:
“I am asking the Chief Constable to explain to me how a man who was regarded as a leading member of an illegal paramilitary organisation was allowed to work in some of the most highly sensitive police stations in the world.
“I want to know why he twice failed police vetting but then mysteriously had the ban lifted by the NIO. Why was the Government paying millions to someone who it suspected to be a leading member of a paramilitary organisation?”