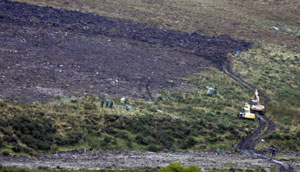 SEARCH: Diggers and workers search for what appears to be Danny McIlhone’s remains at Ballynultagh, in the Wicklow Mountains

THE Sinn Féin President Gerry Adams has welcomed the news that human remains have been discovered at a site in County Wicklow where the IRA says it secretly buried the body of West Belfast man Danny McIlhone in 1981.
The Independent Commission for the Location of Victims Remains (ICLVR) confirmed on Monday 10 November that a search was underway at Ballynultagh, County Wicklow for the remains of Danny McIlhone.
Welcoming the news and the discovery of what appears to be Danny McIlhone’s remains at the site Adams extended his condolences and sympathy to Mr. McIlhone’s family.
The discovery of human remains last weekend has led to the hope that they belong to Danny McIlhone, a 19-year-old West Belfast man who was killed and secretly buried by the IRA in 1981.
Speaking after the find Gerry Adams said, “If news reports are accurate the apparent discovery of Danny McIlhone’s remains will come as a great relief for his family. It is also evidence that republicans consider this issue a priority and continue to work diligently on this important issue.
“It will also be an encouragement to the other families who are still hoping that the remains of their loved ones will be found. I hope that the McIlhone family will now get the closure they deserve.”
The uncovering of the human remains follows a long search for the bodies of nine people who the IRA acknowledged in April 1999 that it had killed and buried. Four of these have been recovered. Five, Seamus Wright, Kevin McKee, Columba McVeigh, Brendan McGraw and Danny McIlhone are still missing.

INTERNATIONAL EXPERIENCE
In 2001, and having examined international experience, Gerry Adams made a series of suggestions to the Irish Government to assist the search process. These suggestions included the use of archaeological specialists, forensic experts, the use of specialist scanning equipment and body dogs. He also suggested that, “a recreation of the scene’, approach be adopted.
Four years later the Irish Government secured the services of a forensic expert with experience in this specialised area of work. He submitted his report, including recommendations on how to proceed, to both British and Dublin governments in February 06. And in August the governments announced their decision to retain the services of the forensic expert and to implement his report.
Following this there were frequent meetings between republicans and the forensic expert.
Detailed discussions and specific information was provided on the five outstanding cases. Each site was visited by the forensic expert and by republicans, including individuals with primary knowledge.
Some suggestions were made by the IRA.  Also the IRA agreed to others made by the forensic expert. These included:
•    Use of aerial photographs, from military or commercial sources of the sites at the time of the executions;
•    Ordnance survey maps of this period;
•    Forestry records;
•    X Ray equipment;
•    Archeological experts;
•    Records, maps, photos, reports of work already carried out on each site;
•    The appointment of a project manager with the power to make things happen.

Meanwhile in a debate in the North’s Assembly on this issue, last week, Adams expressed his, “support for all the families who have campaigned with dignity for many years to locate the remains of their loved ones. I also want to acknowledge once again the grave injustice inflicted upon these families and to express my deep regret about this.”
He said: “For its part the IRA has apologised for the grief it has caused. It has acknowledged that its intention, in working closely with the special forensic investigating team, has been to rectify this injustice.  And it has accepted full responsibility for its actions.
“I also believe that the IRA has provided full disclosure of all of the information available to it and that republicans continue to work diligently on this important issue. This was recognised some time ago by the forensic science investigative consultant Geoff Knupfer, who is working for the Independent Commission.
“Mr. Knupfer said, and I quote; ‘in a spirit of co-operation and reconciliation they are trying to help in every way they can.’
“He went on to say: ‘I am absolutely convinced that they are doing everything they can to assist. The support we have had from them has been absolutely 100 per cent from day one’.
“Now let me make it clear none of this minimises the IRA’s responsibility for the suffering endured with great dignity by these families.
“Mr. Knupfer also acknowledged the incredible difficulties and challenges facing the search teams.
“He said: ‘I think that probably in some cases... the people directly involved have died. If you’re reviewing events that took place 30 years ago, then memories do fade and locations change and that’s one of the things we have identified pretty rapidly – that the sites have changed dramatically’”.
The Sinn Féin leader added, “despite this, it is imperative that efforts continue to find the remains. This is equally true also in those instances where the IRA has said it was not involved. The disappearances of Seamus Ruddy, Charlie Armstrong and Gerard Evans are as much a source of trauma and grief for their families as is that endured by the others.
“Let there be no doubt that there is ongoing work by republicans to ensure that these families have a Christian burial as soon as possible.
“Let me also give an opinion, based upon the work that has been done, and it is that the locations identified by republicans contain the burial sites.
“Let me also assure the families that even as I speak republicans continue to work on this issue; visiting sites, meeting regularly with the experts and doing all that can be done to bring closure to the families involved. I would also call on anyone with information that could be useful in the recovery of the remaining missing bodies to pass that information on to the commission tasked with finding them”.
• The Independent Commission for the Location of Victims remains (ICLVR) can be contacted on the following number 00800 - 55585500.