Ideals of Edentubber Martyrs drive us on today 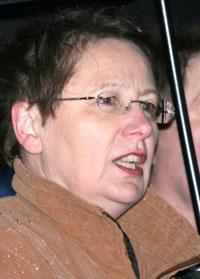 THOUSANDS of republicans assembled on the Louth/Armagh border  on Sunday, 9 November, to commemorate the tragic deaths of five republican activists during the 1956-62 IRA Border Campaign when a landmine exploded prematurely.
The five who died at Edentubber, a few hundred yards from the border crossing at Carrickarnon, and since known as the Edentubber Martyrs, included the owner of the cottage, 54-year-old Michael Watters; Paul Smith, 19 years old, who was born and lived at the Gardens, Bessbrook; Oliver Craven, from Dominic Street, Newry; and Patrick Parle and George Keegan of Wexford.
The theme of this year’s Edentubber commemoration was the role of women in the struggle for Irish freedom and the main address was delivered by Sinn Féin MEP Bairbre de Brún. Below we reprint an edited version of that address: