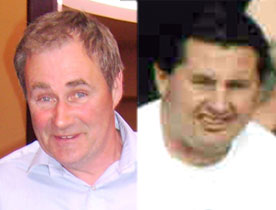 A ROAD accident last Sunday took the lives of two prominent Donegal Sinn Féin members – the Sinn Féin Mayor of Ballyshannon Councillor PJ Branley and his party colleague, Dessie McNulty. They were driving toward Donegal delivering Sinn Féin literature when their car collided with that of 17-year-old Michael O’Sullivan, who was also killed in the accident. The loss of the two party activists has devastated their colleagues in Donegal and tributes have been paid to the men from friends in Donegal and party activists across the North.
Conveying his sympathy to the men’s families and colleagues, Sinn Féin President Gerry Adams MP said:
“The loss of Councillor PJ Branley and Dessie McNulty will be deeply felt by people across County Donegal as well as republican Ireland.
“This is a devastating blow for both families and I want to convey my deepest sympathy to PJ’s wife, Mary; his sons, John, Patrick, Liam, and Ciaran; his daughters, Sharon and Rosaleen; his sisters Mary and Nora, and his 14 grandchildren. Our deepest sympathy also goes out to Dessie’s mother Bridget, his brothers, Joe (London), Peter and Eamonn (Australia), James, Bernard and Michael; and his sisters, Anne and Mary. This is a massive loss to the republican family in Tír Chonaill.”
“PJ’s election as Mayor of Ballyshannon was example of his commitment and work on behalf of Sinn Féin and also the people of Donegal. PJ was a proud and committed republican and was imprisoned twice in the 1970s and 1980s. He will be deeply missed by his family and the wider community.
“Dessie McNulty was another one of our senior party members in south Donegal. A painter and decorator by trade, his work and commitment to the building and development of our party inspired all of those people around him.
“It is particularly symbolic of the men that they died while carrying out work on behalf of the party. For them even an early Sunday morning was time for activism and they were out delivering party literature.”
The two were distributing leaflets to Sinn Féin cumainn for the campaign against the Budget cuts.
Donegal Senator Pearse Doherty also paid tribute to the two Donegal Sinn Féin members, extending his condolences to both families and also to the family of Michael O’Sullivan, the young man who also died in the two-car collision.
“Councillor PJ Branley and Dessie McNulty exemplified all that is best about Irish republicanism. All of us in Donegal Sinn Féin are absolutely devastated at their loss,” he said.
“The election of PJ as Mayor of Ballyshannon earlier this year was a justified culmination of many years of dedicated service to his local community, particularly in the area of community development.
“PJ was an absolute gentleman and a proud, intelligent republican. He also had a great sense of humour, always lifting his fellow activists with his natural way.”
Of prominent Donegal Sinn Féiner Dessie McNulty, he said:
“Dessie was another one of our senior party members in South Donegal. Dessie was always inspiring those around him with his enthusiasm and appetite for hard work.
“It is no surprise that Dessie and PJ died while on party business together, having attended a local event together the night prior to the tragedy and on their way to hand out leaflets at the time of the tragedy.
“Dessie was really looking forward to PJ’s election campaign next year for both Ballyshannon Town Council and Donegal County Council and was a key member of our campaign team. Their contribution to all has been immense and their loss immeasurable.”
Councillor Pádraig Mac Lochlainn said that he and his party colleagues in Donegal were devastated at the loss of two friends and comrades.
“Our Sinn Féin team in Donegal is very close and to us these two men were inspirational. On the human level it’s a big loss. PJ was easy-going and relaxed by nature but very wise with it and especially when it came to working out strategies around elections and campaigns generally.
“He knew how to speak to people in their own language  – on their own terms whether they be farmers, fishermen or people from any walk of life.
“Dessie was a very positive individual with a mentality that saw possibilities rather than obstacles. He was a ‘can do’ person with a quietly determined attitude.
“We’re devastated at the loss of these two core party members. It reminds me of the times when the war was on and you’d hear news of Volunteers being killed in numbers. It’s a big loss.”
Extending his condolences to the family, west Tyrone MLA Barry McElduff reflected on the generosity and cheerfulness of the late PJ Branley:
“I always felt that PJ was very generous with his time and energy in that he’d travel here to Tyrone for commemorations. He also appeared to be a very cheerful person – full of stories and anecdotes. He struck me as a very solid republican.”
Ar dhéis Dé go raibh a hanamacha uaisle.