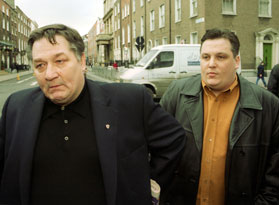 FROM the relentless persecution and abuse of an extended family for a murder that never happened to gardaí planting explosives across the country in the name of career advancement – these are just the most blatant acts exposed by the Morris Tribunal. Six and a half years on, the investigation into Garda corruption in Donegal has finally concluded.
The vindication of the McBrearty family and other victims of abuse in Donegal is priceless. The tribunal itself cost €50m and rising. Was it worth it? Yes, if the right lessons are learned and future corruption prevented. But have those lessons really been learned?
The Minister for Justice, Dermot Ahern, managed to successfully eclipse the principle findings and recommendations of the tribunal in the Dáil debate and surrounding media coverage. He did this by launching an attack on the two TDs who initially brought allegations of abuse to the then Justice Minister, John O’Donoghue, an action which prompted the establishment of the tribunal in the first instance.
TDs from the Establishment opposition parties in turn lambasted Ahern for making their party colleagues the focus of a debate which should have been about Garda corruption.
They no more wanted to highlight the endemic cultural and systemic problems within the force than did their counterparts in government.
Both Sinn Féin’s Aengus Ó Snodaigh and Martin Ferris made lengthy contributions to the three-and-a-half-hour debate. And they, almost alone, dealt with the priority problems pin-pointed by Morris and, importantly, with his vital recommendations for reform.

COVERT SURVEILLANCE
In his contribution Ó Snodaigh focused primarily on the sixth Morris report which dealt with covert surveillance, the authority of ‘members in charge’ and a provision of the Garda Code which effectively causes all Garda members to deny Garda abuse when it is being investigated.
In relation to covert surveillance and the recording of conversations, Ó Snodaigh said:
“As serious organised crime appears to abound unchecked and TV shows such as The Wire grow in popularity, the public demand for the use of covert surveillance is understandable. However, in the current legal vacuum, Garda abuse of such investigatory techniques is inevitable.
“In the cases investigated by the Morris Tribunal it was found that gardaí were secretly recording conversations with civilians and with other Garda members whenever it took their fancy.
“Justice Morris was highly critical of the absence of legislation or guidelines governing the area.
“Morris also argued that authorisation for covert surveillance should come from a judge not from the Garda themselves.”
Ó Snodaigh called for legislation without delay.

MEMBER IN CHARGE
Ó Snodaigh moved on to detail Morris’s recommendations in relation to the ‘member in charge’. The member in charge in a Garda station at any given time is responsible for ensuring that the rights of detainees are respected and vindicated. The sixth Morris report pointed to a need for cultural change. Morris argued that the role is not vested with sufficient respect and authority. He advised that a member in charge should be a Garda of considerable experience and of sergeant rank at least.
Making it clear that these problems are systemic rather than limited to Donegal, Ó Snodaigh said:
“The more recent report of the Hartnett Inquiry into the death following custody of 14-year-old Brian Rossiter in Clonmel, County Tipperary, picks up on the same issue.  In that case successive members in charge failed even in their most basic duty to keep accurate records of custody during his unlawful detention.”
Ó Snodaigh also drew attention to Garda statements in response to claims against the force.
Regulation 6.37(4) of the Garda Code, which relates to civil actions against An Garda Síochána, states: “Each of the allegations should be addressed and refuted where possible.”
Ó Snodaigh said:
“The way this is being interpreted causes huge problems and it needs to be replaced. Gardaí should simply be required to give a full, truthful and frank account of incidents and then the courts can decide whether an allegation is ‘refuted’ or not.
“In Justice Morris’s own words, ‘It is regrettable that such a basic proposition in relation to telling the truth should have to be spelt out in this way.’”

DENIAL
Perplexingly, the Government and much of the Opposition remain in denial as to the extent of corruption across the force.
This was clear from the language and tone of the minister when he launched the two final Morris reports earlier this month.  Dermot Ahern said that “some persons were treated badly by individual members of An Garda Síochána” and he deemed it “the disgraceful behaviour of a small number of gardaí in Donegal during a period in the 1990s”.
He insupportably reduces what is in reality a significant problem of systemic Garda abuse to a small number of individual gardaí in one location and simply during one time period.
Sinn Féin’s Martin Ferris challenged the minister’s geographically-reduced understanding of Garda corruption. He said that while no one is claiming the level of corruption uncovered by Morris is endemic throughout the force, we should be aware that there are similar allegations in other counties and that these have not been satisfactorily addressed.
Ferris proceeded to cite a number of specific examples from his own constituency of County Kerry.
James Sheehan was arrested in Ardfert in 1989 after gardaí claimed to have found a revolver on his dashboard and ammunition on his mantelpiece. In March 1990, a direction was issued to charge him for firearms offences; several months later, this was reversed and the charges dropped. This all happened unknownst to Sheehan who was never actually charged.
“James Sheehan was adamant that neither the gun nor the ammunition had anything to do with him. From that day to this week, he has been trying to ascertain the facts of this case,” the Kerry TD said.
Contesting his legal case, which aims to discover the truth, the state continues to rely on the fact that the now discredited Garda Complaints Board exonerated the gardaí involved.
“As in the cases investigated by the Morris Tribunal, questions need to be answered in the Sheehan case as clearly something is not right.

KERRY BABIES AND SALLINS
Ferris went on to detail further examples from his home county including the case of John O’Shea of Castlemain, the infamous Kerry Babies scandal and the Sallins case, in relation to which he said:
“I was present on the night the men involved in the case were brought to Portlaoise Prison after 48 hours in custody and witnessed how they were unable to walk up the stairs of the prison as a result of the brutality they had suffered in Garda custody.”
Martin Ferris concluded:
“The Garda Síochána Ombudsman Commission, by its own admission, is inadequately resourced to deal with the volume of complaints it receives. In addition, the office is excessively dependent on the Garda to investigate complaints and does not have sufficient staff at its disposal to carry out its work.”
All of the recommendations arising from Morris must be implemented urgently and wholeheartedly in the interests of victims, the wider community and of the force itself.  Regrettably, during last week’s Dáil debate, neither the Government nor the Establishment Opposition parties demonstrated any appetite for the job.