Ruane: Equality in education is worth fighting for 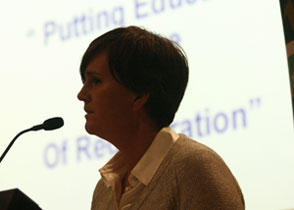 THE Education Minister in the Six Counties, Caitríona Ruane, has outlined the issues surrounding the abolition of the 11-Plus transfer test and assured parents that the Department of Education will manage pupils’ transition from primary to high school in the absence of cross-community support for her legislative proposals.
Speaking at a debate in St Mary’s University College in West Belfast on 23 October, organised by the West Belfast Partnership Board, Ruane reaffirmed Sinn Féin’s determination to replace an unnecessary and discriminatory system with one that can deliver opportunities to every child through greater choices, more co-operation between schools, and area-based planning where all children will be helped to realise their full potential.
The minister explained that objective factors mean systemic reform of education is inevitable, and that during this transition period we face the choice of caving in to the elitist grammar school lobby or continuing the struggle to expand the consensus across all communities on the need for legislation to phase out academic selection.

CHANGE INEVITABLE
Ruane pointed out the need to reflect on the landscape of the education system as it was when Sinn Féin took up the leadership of the Department of Education in 2007.
“This was a situation where, regardless of which political party was heading education, the last 11-Plus would be sat in 2008 and the legislation underpinning academic selection would lapse in 2010,” she said.
“The abolition of academic selection requires cross-community support in the Assembly – but to pass new legislation allowing the continuation of the transfer test after the current legislation lapses in 2010 also requires cross-community support.
“This is not going to happen: Sinn Féin is not going to vote to back education apartheid, and neither is the SDLP.”
Ruane said that the other key objective factor that made reform inevitable was the fact that demographic decline has meant there are currently 50,000 empty desks in classrooms across the North.
“This situation is hitting our secondary schools disproportionately hard, where empty desks means these schools struggle for money, staff and to deliver the range of educational pathways our young people are entitled to,” she said.
“These problems make the current system unsustainable and mean that structural reform of education in the North is absolutely unavoidable.”

PROPOSALS
Following a period of extensive consultation with education stakeholders, Ruane took Sinn Féin’s proposals to the Executive in May. The ambitious reform package aims to abolish academic selection over a transitional period of three years and replace selection at 11 with informed choice by students about their educational pathways at 14.
The minister proposed a move towards area-based planning of sustainable schools where students will be accepted on community, geographical and family criteria; and that the curriculum be expanded through the Entitlement Framework so students have more choice in subject selection.
Responding to schools’ concerns about managing the transition, Ruane included compromise, phase-out arrangements in her reform package. She has outlined to schools that after the last 11-Plus is sat by Primary 7 this November, schools can apply to be allowed to select a limited and declining proportion of their students on the basis of academic selection (50 per cent in 2010, declining to 30 and 20 per cent over the following two years) before it is completely eradicated in 2013.
During the phase-out period, a new test will be put in place by the Council for Curriculum Examination and Assessment (CCEA) for parents who want to put their children through an entrance test but it will not disrupt the curriculum and will not be sat in primary schools.
The DUP and UUP have said they will block the proposals in the Assembly.
Ruane said:
“Sinn Féin intends to build on and expand the existing broad professional consensus and support from across all sections of the community for the abolition of academic selection.”

GRAMMAR SCHOOLS LOBBY
Since outlining her proposals to the Executive, a group of 30 grammar schools across the Six Counties – calling themselves the ‘Association for Quality Education’ (AQE) – have announced their plans to hold unapproved entrance tests beginning next year. Three Catholic grammar schools have announced similar plans.
At the West Belfast Partnership Board meeting, Ruane said:
“What the grammar schools lobby is doing is putting the interests of their institutions first and allying themselves with the most right-wing elements of unionism”.
Addressing Kenneth Bloomfield, head of the AQE, who was a participant in the debate, Ruane said:
“Despite the fact that the future of academic selection is dependent on cross-community support, the AQE has never tried to engage with Sinn Féin or convince us of their proposals.
“They are not interested in achieving political agreement and legislation.
“During my painstaking consultation and discussion with all of the stakeholders in education, this grammar schools lobby, with the assistance of the media, has exploited the period to sow confusion and panic and try to slow the momentum for change.”

CATHOLIC HEADS
On 21 October, the Catholic Heads Association (CHA), which represents 31 Catholic grammar schools across the North, said they would recommend that Catholic grammar schools continue to use academic selection for the full student intake “until the appropriate legislation is in place... preferably using the CCEA test which the minister has commissioned”.
Responding to the statement, Ruane said it “showed what was already patently obvious – that regulation is the best option. That is what I have spent my time in office trying to bring about.”
The CHA has said this is a temporary measure and it is committed to the review of Catholic education which is currently underway and that is likely to recommend the abolition of academic selection and the end of the division between grammar and secondary schools.
However, Ruane urged all those committed to phasing out academic selection to follow the guidance of the Department of Education in the transition period and in the absence of an agreed legislative framework.
While the unionist parties and the AQE schools disagree with the proposals on ideological grounds, a wide consensus has developed through the education minister’s process of consultation in support of phasing out academic selection, including the vast majority of educationalists, the secondary heads, all five teachers’ unions active in the North, the Catholic Church and the SDLP. Ruane said:
“We all know that those committed to the old elitist system are unlikely to change their position unless confronted by a strong public consensus across all communities. All of those who want to see a definitive legislative framework for transfer achieved should aim to bolster this consensus, not break from it.”

UNREGULATED
Several worried parents questioned the Education Minister at the St Mary’s meeting on what a possible lack of political agreement will mean in practice for their children.
Ruane explained that she has applied for time in the Assembly to propose her legislative reforms but that, in the event that they fail to achieve cross-community support, transfer will be guided by the Education Department and managed at the school level by schools’ boards of governors.
If transfer arrangements are not agreed by the Executive and Assembly then use of admissions criteria for children starting post-primary school in September 2010 may be unregulated.
Ruane pointed out that an unregulated system would not safeguard the status quo, which operates under a specific legislative framework which will lapse in 2010 and the Department of Education’s provision of a transfer test.
The minister has repeatedly described the decision by some grammar schools to introduce an independent, unapproved transfer test as a road “fraught with administrative and litigious perils”.
Speaking at the St Mary’s meeting, Kenneth Bloomfield said the AQE had sought “heavyweight legal advice” which informed him that, unless legislation banning academic selection was in place, using academic admissions criteria could not be challenged.
But there would be no legally enshrined basis for discriminating against students using such admissions criteria. And while the transfer test is provided by the CCEA, it is delivered by a professional, dedicated and expert educational body complete with appeal mechanisms.
Ruane has asked: “How will a new test, developed independently and privately, meet this standard of watertight delivery?”
The minister has also made it clear that she will aim to minimise the damage this will cause to children’s education by taking action against primary schools that distort the curriculum in order to prepare students for sitting unapproved tests.

GUIDANCE
“I understand that parents feel frustrated by the lack of certainty that comes with the lack of political agreement. Unionist politicians have sought to make it as difficult as possible to go down the Executive route,” Ruane said.
“In the absence of consensus what we face into is unregulation but remember the majority of schools prefer to end academic selection.”
She explained that schools’ boards of governors would apply non-academic criteria and they would receive guidance, assistance and advice from the Education Department in doing so.
“The Department of Education will manage the change and set fair admissions criteria for schools,” the minister said.
“If there is no political agreement, we will also manage enrolment numbers to make sure that secondary schools do not suffer the brunt of demographic decline.”
Ruane assured parents: “Your children will get a good education – a much better education than under the current system.
“We are building a network of good schools that can co-operate and collaborate with each other to deliver the top-quality education our children are entitled to, where different pathways are open at all stages.”

WORTH FIGHTING FOR
Ruane has described the greatest cost of not agreeing an alternative to academic selection as the possible failure to address the wider reform agenda that she has set out.
It’s worth remembering what this struggle is about, Ruane said. “Behind the complexity and frustration of the current situation, the simple question of equality of opportunity in education, and in broader society, is raised.”
She said that getting rid of selection won’t solve all the problems in the education sector or broader society but that “the first step in transforming education into a means to overcome cycles of poverty and disadvantage is abolishing academic selection, which clearly perpetuates these cycles”.
Speaking at St Mary’s, the minister urged working-class people of all backgrounds to build alliances with each other and with the progressive educational sector to achieve broader consensus on the need for education reform.
“Achieving equality in education is not going to be easy, but Sinn Féin believes it is absolutely a goal worth struggling for.”