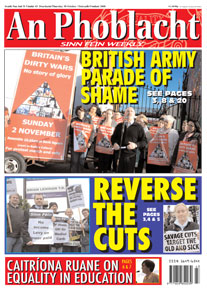 Sinn Féin President Gerry Adams has expressed serious concern at the failure of British Secretary of State Shaun Woodward to recognise the provocation offered by the British Army military parade in Belfast City centre this Sunday.
Adams called for “a calm and dignified protest”. He said:
“I hold the British Secretary of State responsible for the controversy that has arisen around the British Army’s military parade in Belfast on Sunday. While the British Ministry of Defence may be oblivious to the sensitivities involved surely Shaun Woodward should have realised that Sunday’s event is ill-advised.”
As well as the provocative parade on Sunday there is a religious service. Adams said the latter would have been sufficient to provide families with the opportunity to welcome back their loved ones. Adams continued:
“I want to acknowledge that the families of the soldiers involved are pleased to see their loved ones return from a dangerous situation. This is very understandable and acceptable. But the decision by the British Ministry of Defence to organise a military parade through Belfast City centre is totally unacceptable, not least because of the role of British forces in Ireland and in the city of Belfast. Republican and nationalist Belfast has suffered dreadfully under British military rule in the recent conflict. At times working class unionists and loyalists have also felt the brunt of British military actions. Indeed at times the British Army has come under fire from loyalist gunmen. So there are lots of contradictions in the unionist and loyalist position.
“There are also people, including many who are not Sinn Féin supporters, who feel that a march to celebrate the actions of the British Army and the British government in its wars in Iraq and Afghanistan is wrong.
“In Belfast Sinn Féin has been attempting to create the sense of a shared city where citizens can agree to disagree on some issues, but unite in the common good on other issues. That means creating space, not least on a contentious issue like Sunday’s event for peaceful expression of differences of opinion.
“I believe that it is possible for both opinions to be given expression on Sunday if everyone participating does so calmly and with dignity and restraint.
“Sinn Féin has gone to extraordinary lengths to ensure that the march and rally will be well marshalled and managed, as well as peaceful and dignified.
The remarks by some unionist representatives have been over the top. They too have a responsibility to use their best influence to ensure that Sunday’s events pass peacefully.”

THE British Ministry of Defence should cancel their parade by the Royal Irish Regiment through Belfast city centre, Bairbre de Brún MEP said this week.
Speaking after a press conference organised in support of the families of those killed by the British Army, Sinn Féin’s de Brun described the planned RIR parade, scheduled to take place on Sunday, as “provocative and divisive”.
“The families of those killed by British state forces have approached Sinn Féin and asked us to highlight their opposition to the Ministry of Defence decision to hold a military parade which involves three British Army regiments, a saluting post, a military band and a fly-past by fighter jets.
“The British Army’s record in Ireland is one of wholesale repression which has included torture, collusion and murder.
“The RIR, formerly known as the Ulster Defence Regiment, is a totally discredited force which has a long history of violence and loyalist paramilitary connections,” said de Brún.

MILITARY CIRCUS
The Sinn Féin MEP pointed out that the imposition of a British military parade through the streets of Belfast was just as provocative as a similar parade through the streets of Derry City, where 14 civilians were shot dead by British paratroopers.
And, she added, it is just as inappropriate as a British Army parade through Dublin or Monaghan, where 32 people were killed in bombings in which members of the UDR were involved.
“The British MOD is responsible for inflicting this military circus upon our communities. The British Secretary of State, Shaun Woodward, and John Hutton, the British Minister of Defence, should be asked to explain why they have approved these plans,” said de Brún.

INCENSED
Sinn Féin West Belfast MLA Jennifer McCann said families and victims of British Army violence were incensed by the MOD decision to parade through the city. She described Sinn Féin’s decision to hold a protest rally as a careful and proportionate response.
“Sinn Féin is hosting a rally and protest to express in a peaceful, dignified and solemn way to reflect the anger and frustration felt by the nationalist and republican community,” said McCann.
Outlining events which led up to Sinn Féin’s decision to host a protest rally against the RIR parade, McCann accused the British MOD of duplicity.
“The British MOD sought council funding for a civic reception which was carried on a split vote. That reception is scheduled to go ahead. But on the back of that the MOD applied to the Parades Commission and falsely claimed that Belfast City Council was organising a RIR parade prior to the reception. In fact, the parade was wholly organised by the British MOD.
“The rally and protest is not against families being reunited. It’s in recognition of the hundreds of families who cannot be reunited with loved ones because of the actions of the British Army,” said McCann.

DEFENCE MINISTER’S INSULTS
The arrogance of the British MOD decision has been further compounded by comments made by the British Minister of Defence during a recent interview in The Sunday Times.
In the interview John Hutton dismissed those opposed to a British military parade through Belfast city centre as “cretins” and remarked that “we shouldn’t be afraid to take those people on”.
In contrast to the minister’s inflammatory remarks, RIR Chaplain David Latimer urged the British MOD to act “sensitively” and warned against a “fanfare of parades”. Speaking in Derry, Reverend Latimer said the last thing needed was “an event that will be used for one side to score points over the other”.
Speaking at the press conference, Clara Reilly, of the United Campaign against Plastic Bullets, described walking behind the coffins of children killed by the British Army.
“The families of those killed by the British Army understand the pain of others and the wish of families with members in the British armed forces to welcome them home. That need could have been fulfiled in a way that didn’t include a military coat-trailing exercise through Belfast city centre.”

MORATORIUM
A spokesperson for Relatives for Justice, Mark Thompson, pointed out that in England there is a self-imposed moratorium by the British Army on homecoming parades because of anti-war protests.
“In Belfast, we do not have to look to Iraq and Afghanistan for British atrocities: we have the Ballymurphy, Springhill and New Lodge massacres amongst a litany of events that claimed several hundred lives across this city.
“For many Belfast citizens, particularly those bereaved by the British Army, the parade is crass and offensive and will undoubtedly attract hangers-on who simply want to cheerlead in a triumphalist way.
“Those shops promoting loyalist paramilitary regalia across Belfast – which during the summer were selling Ireland’s national flag to be burned at Eleventh Night bonfires – are now selling RIR ‘Welcome Home’ Union flags.”
Describing the decision to parade the British Army through Belfast as “defying all logic”, Thompson called for recognition of the hurt and pain inflicted by the British Army within the nationalist and republican community.

RALLY AND PROTEST: In recognition of the hundreds of families who cannot be reunited with their loved ones because of the actions of the British Army