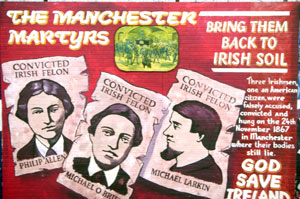 CAUSE CELEBRE
The Martyrs became a cause celebre for Irish people throughout the world and the journalist, MP and future Lord Mayor of Dublin, TD Sullivan, wrote the ballad God Save Ireland in their honour. For the next 50 years it was Ireland’s unofficial national anthem.
A generation after the hangings – in 1897 – the Manchester Martyrs memorial committee was given permission to raise a monument to the three in St Joseph’s Cemetery in Moston. Each year, a commemoration was held on the Sunday closest to 23 November, the date of the executions. This continued until the early 1970s when, with the outbreak of conflict in the Six Counties, it became a target for violent attack from right-wing extremists. The Manchester Martyrs monument itself was badly vandalised.
An appeal fund has now been established for the restoration of the Manchester Martyrs monument. You can make a donation at the address below.