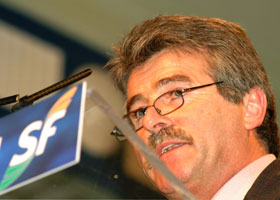 SINN FÉIN Economic Spokesperson Arthur Morgan slammed the controversial income levy contained in Brian Lenihan's Budget as a regressive tax and has called on the government to increase the levy threshold to the average industrial wage and for it to be applied only to income earned above the €38,000 figure.
Speaking on Wednesday, the Louth TD said:
“Last week Finance Minister Brian Lenihan stated that he supported a progressive tax system. The Minister’s decision to introduce an income levy is in fact regressive as it is a flat tax that disproportionately hits those on low to middle incomes.
“Sinn Féin in its pre-Budget submission called on government through the Commission on Taxation to undertake a rolling review of taxation with a particular eye to increasing the number of bands to assist working families who are paying too much tax. Such a move would in real terms be fair and progressive.
“The government’s climbdown decision not to apply the income levy to those on the minimum wage does not go far enough. In practice the levy acts as a disincentive for those on the minimum wage to work overtime as workers will be levied on the full amount once they work a euro over the levy threshold.
“However it is just those on the lowest incomes in the state who will be hardest hit by this punitive tax. Low to middle income earners are struggling to cope with rapidly rising cost of living expenses. Last weeks budget was an opportunity to address this but instead government heaped additional taxes hitting working families and small businesses already struggling to get by.
“I am calling on government to increase the income levy threshold to the average industrial wage and that the levy should only be on income earned above the €38,000 figure. The levy is a regressive tax however if the government is intent on implementing it then it is imperative that they do so in a manner that minimises its negative impact on working families.”