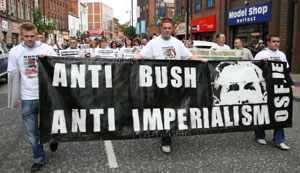 BELFAST: Against the Gulf War, then and now

SINN FÉIN plans to hold a peaceful protest during the ‘homecoming’ parade for British soldiers returning from Iraq and Afghanistan in Belfast City centre on 2 November.
Speaking to An Phoblacht this week, Sinn Féin MLA Paul Maskey said:
“These parades, being held in British towns and now in the North of Ireland, are an attempt by the British Government to bolster public support for its increasingly unpopular occupations of Afghanistan and Iraq.”
The Belfast parade, which is being organised by the Ministry of Defence (MoD), will include members of the Royal Irish Regiment (RIR), formerly the Ulster Defence Regiment, the navy and air force. It will be the first time British soldiers have paraded in Belfast since World War II.
Maskey said:
“The proposed Belfast parade being pushed by the British Government and unionist politicians is not only aimed at legitimising the illegal occupations in the Middle East but also at making ‘heroes’ of the forces that have subjected the nationalist population of the North to decades of violence and intimidation.”

DIVISIVE
In August, the Democratic Unionist Party and the Ulster Unionist Party, with the help of the Alliance Party, forced through a decision on the Belfast City Council to host a reception for the British soldiers after the parade. Paul Maskey described this motion as “divisive and provocative”.
“We in Belfast City Council have worked very hard over recent years to bring all communities together, and this decision sets back those efforts to build an inclusive city for all citizens,” he said.
In February 2003, more than 10,000 Belfast citizens from many different backgrounds marched in opposition to the looming US/British invasion of Iraq. Maskey told An Phoblacht:
“The march and rally Sinn Féin has called is a continued expression of this strong opposition.
“It is also to highlight the many victims of the British Army, UDR and RIR here at home – victims of collusion, intimidation, the shoot-to-kill policy, torture and state murder.”
As a militia recruited from the North and armed and trained by Britain, the UDR replaced the reviled B-Specials police in 1970 and formed the largest infantry regiment of the British Army in the Six Counties. It was notorious for its vicious sectarianism and collusion with loyalist death squads in the murder of Catholics.
The 1975 Miami Showband massacre was one such attack organised jointly by UDR members and the UVF. The UDR merged with the Royal Irish Rangers to become the Royal Irish Regiment in 1992.
Paul Maskey said:
“The nationalist population of Belfast has first-hand experience of the denial of national and human rights by means of brutal military occupation.
“The British armed forces cannot expect the same reception in Belfast as they received in Shropshire.
“It is an absolute affront to people across Ireland to force this parade through Belfast City. We will not be silent and allow the aims shared by unionist politicians and the British Government – to legitimise the bloody history of the British occupation of Ireland and to build support for its colonial adventures in the Middle East by glorifying the participants in the war – to be fulfiled.”

UNPOPULAR
While in Belfast the proposed ‘homecoming’ parade has obvious triumphalist, unionist political overtones, in Britain the recent spate of parades for soldiers is part of a concerted campaign by the Government to drum up support for its deeply unpopular occupations and revive dwindling recruitment to its armed forces.
The new head of the British Army, General David Richards, said on 17 October that a “surge” of 30,000 more coalition troops is needed in Afghanistan to defeat the Taliban-led resistance. Of these, he proposes that 5,000 extra troops be sent by Britain for a major escalation of the war in Helmand province in southern Afghanistan next year.

AIR ASSAULT
The RIR troops, which previously served in Basra in Iraq, will be returning from a six-month tour in Afghanistan’s Helmand province, where the regiment’s first battalion is part of the 16 Air Assault Brigade alongside the Parachute Regiment.
On 15 October, days after killing more than 100 anti-occupation fighters using air strikes in Helmand province, British forces launched further strikes on an Afghan village in the Nad Ali district. The BBC correspondent in Helmand’s capital Lashkar Gah said he witnessed the bodies of 18 civilians, which were carried from their village to the governor’s house in the capital by furious villagers.
Of the 18, three were women and 15 were children, between the age of six months and 15 years old.
According to the United Nations, from January to August this year, 1,445 Afghan civilians were killed, many in air strikes. On 21 August, a NATO strike killed 95 civilians in Herat. In July, in what appears to have become the signature atrocity of the ‘War on Terror’, 47 Afghans were killed in an air strike on a wedding party in Helmand province.

IRAQ
Paul Maskey told An Phoblacht:
“The scale of misery unleashed on Iraq and Afghanistan by the US/British occupation forces is almost beyond comprehension.”
In Iraq, the occupation caused the violent deaths of more than 600,000 people in the first three years of the war, according to a study carried out by the world’s leading school of public health at the Johns Hopkins University, which was published in the Lancet medical journal in October 2006. Several estimates now put the death toll at higher than one million Iraqis.
At the beginning of this year, the UN said two million Iraqis have fled the country as refugees and a further 1.5 million are internally displaced.
There are currently more than 20,000 Iraqi prisoners in US/British custody and torture is rife. In July, the MoD was forced to pay nearly £3 million to 10 Iraqi victims tortured in custody by British soldiers in Basra in 2003, including to the orphaned children of Baha Mousa, a 26-year-old hotel receptionist who was beaten to death in custody in September 2003.
As well as severe beating, the 10 victims were all subjected to the infamous ‘five techniques’ used by the British Army during its torture of Irish republican prisoners.
There are dozens more cases now being brought against the MoD, including the case of a young man who was beaten and sexually abused in British custody when he was 14 years old. As well as the five techniques, investigations show the use of systematic sexual abuse and humiliation: designed specifically to psychologically torture Islamic prisoners by stripping them of their self-respect.
Paul Maskey said:
“This is the sickening reality of life under these occupations for the people of Iraq and Afganistan. Is this what we're supposed to celebrate?”
Last weekend, more than 50,000 Iraqis rallied in Baghdad, with Western media reporting popular chants of “Get out occupier” and “We demand the end to the occupation of our country.”
Speaking on the Sinn Féin protest against the ‘homecoming’ parade, Maskey said, “This is not a protest against individual soldiers. It is a protest against the attempt by British and unionist political leaders to glorify occupation and legitimise cruel oppression.
“Sinn Féin will be holding a peaceful and dignified protest against this attempt – and we urge everyone who supports human rights and the right of people to live free from foreign subjugation to join us on 2 November.”