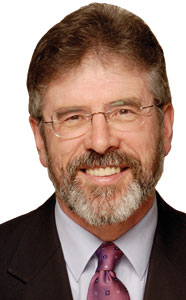 A SINN FÉIN delegation, including party president Gerry Adams MP MLA, and Francie Brolly MLA, Niall Ó Donnghaile and Rosaleen McCorley met on Tuesday, 21 October, with Culture Minister Gregory Campbell to discuss future planning and development of the Irish language, including the introduction of an Acht na Gaeilge to protect and promote the rights of Irish speakers.
Speaking after the meeting, Gerry Adams said:
“We put it to the minister that he has a responsibility to be a minister for all the people of the North, including Irish-speakers.
“And that this can best be accomplished by the minister consulting with Irish-speakers and bringing forward both an effective strategy and by introducing legislation – an Acht na Gaeilge – that can protect the rights of Irish-speakers.
“We told Mr Campbell that the previous minister had promised an Irish-language strategy and in order to progress this Sinn Féin presented him in May of this year with a draft ‘Irish Language Strategy’ paper. No strategy has been brought forward.
“The current minister has promised to produce a strategy before the end of the year. However, we heard nothing today that would persuade us of his goodwill in this respect.
“Despite this, Sinn Féin intends to keep pressing the minister on this issue and to secure the adoption of an effective Irish-language strategy and an Acht na Gaeilge.
“Judging by his demeanour I think, in his heart of hearts, the minister knows that this is only a matter of time.”