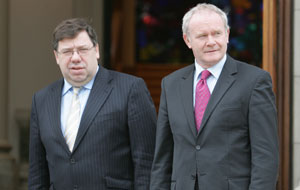 Cowen and McGuinness: There is an onus on the Taoiseach to become involved

THE North’s joint First Ministers, Sinn Féin’s Martin McGuinness and Peter Robinson of the DUP, held separate meetings in Dublin with Taoiseach Brian Cowen on Friday 17 October in ongoing efforts to address the political crisis which has affected the political institutions.
Martin McGuinness said that Sinn Féin has complied with its obligations on policing and justice under the St Andrew’s Agreement and the DUP has to fulfil its own obligations.
“There is a governmental responsibility for us to sort it out amongst ourselves,” McGuinness said. “But if we can’t do it then there is the onus on the Taoiseach and the British Prime Minister to become involved.
“There are still people within the political process who don’t want a nationalist or a Catholic hand on a particular lever of government and that is a huge mistake.
“For far too long in the North we had a situation where the unionist political leaders regarded the police as their police. Those days are gone. We want to have a say in policing.
“We want to ensure that the people from our community regard the police as their police also. It is a big mistake for the DUP to engage in shenanigans which try to prevent that occurring.”