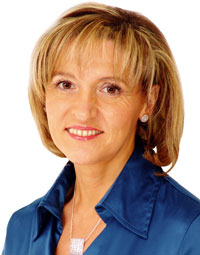 CRITICAL IMPACT: Martina Anderson has denounced the Policing Board move

THE Policing Board decision to endorse the use of Taser 50,000-volt electro-shock guns throughout the North has been criticised by Sinn Féin MLA Martina Anderson. The UN recently concluded that pain delivered by the Taser amounted to torture.
The decision was taken during a meeting of the Policing Board last week with 12 out of the 15 board members voting in favour of greater deployment. Sinn Féin was the only political party on the board to oppose it.
The PSNI has recently completed a pilot scheme deploying 12 Tasers. During this trial period, only one person has been targeted and he required immediate hospital treatment. An investigation into the decision to deploy a Taser – the man was unarmed and standing at the doorway of his home in his pyjamas when he was hit – is already underway.
A Taser delivers its 50,000-volt shock through tiny metal hooks that are fired into the target’s body. The weapon is classified as non-lethal but has already killed around 300 people worldwide.
Martina Anderson, Sinn Féin’s spokesperson on Human Rights, described the board’s decision as “shameful” and claimed the move was an attempt to undermine the judicial process.
“The deployment of Tasers is currently under scrutiny by a judicial review. The decision by the Policing Board to railroad this through before the review has been completed undermines the judicial process and smacks of contempt.”

FORM OF TORTURE
The Foyle MLA questioned the categorisation of the Taser as a non-lethal weapon and pointed out that a United Nations Committee recently concluded the use of Tasers was a form of torture that can kill.
“Three hundred people worldwide have already died after being shot by a Taser and there is growing evidence to suggest that existing research, with which use of the Taser has been justified, is unreliable.
“Tasers affect different people in different ways. This is particularly significant when it comes to their deployment against children. A safety notice issued by the manufacturers specifically warned against the use of Tasers on children and yet the weapon has been authorised for use against under-18-year-olds.”
The British Government’s own scientific advisory team on the medical implications of the deployment of Tasers concluded that children would be “potentially at greater risk from the cardiac effects of Taser currents than normal adults”.
The advisory team went on to admit that the expectation was that, once deployed, a growing number of children are likely to be subjected to the Taser. In other words, there is a contradiction between the projected target of “normal adult” and the likely target of increasing numbers of children.
This contradiction is one of a number of issues currently being considered by the United Nations Committee on the Rights of Children. The deployment of Tasers against children is also central to an Equality Impact Assessment currently before Belfast’s judiciary.
Furthermore, there has been no consideration of the impact of deployment against adults who, for a variety of reasons, might fall outside this arbitrary category of ‘normal’ or ‘average’.

PATTERNS
The research has not assessed the impact of Tasers on the elderly, disabled and ill or specific categories such as pregnant women.
Even more significantly, there has been no research into the likely outcome of arming a police force with Tasers, particularly one like the PSNI which is emerging out of a conflict and is still grappling with its history of human rights abuses.
But by studying patterns of practices that have emerged in other police forces in relation to the Taser, we can begin to anticipate possible outcomes. It is already known that the more police officers that are authorised to use Tasers, the greater the frequency with which Tasers are used, suggesting it’s a case of ‘Give a man a stick and he’s more likely to beat his dog.’
A far more sinister pattern is also emerging. Given the opportunity, members of the police will use Tasers as a form of illegal punishment or torture. In Canada, a man already restrained by handcuffs was shot by four Tasers.
In other words, within minutes the victim was subjected to 200,000 volts the impact of which has never been researched. It is unclear if there has been any research into the impact of rapid and repeated exposure to a Taser current.